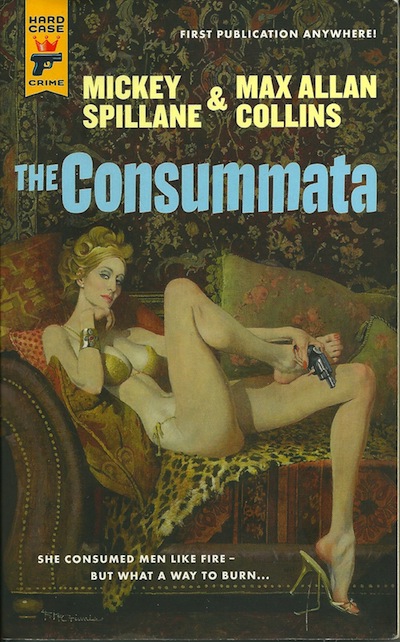 They say that you can’t judge a book by its cover and with The Consummata they were completely right.  The Consummata follows the exploits of Morgan “The Raider” as he tries to retrieve money that was stolen from some Cuban exiles.  Here is a synopsis:

“FRIEND, YOU’RE TALKING TO A GUY
WITH A PRICE ON HIS HEAD AND
THE POLICE AT HIS BACK…”

Compared to the $40 million the cops think he stole, seventy-five thousand may not sound like much. But it’s all the money in the world to the struggling Cuban exiles of Miami who rescued Morgan the Raider. So when it’s snatched by a man the Cubans trusted, Morgan sets out to get it back. A simple favor – but as the bodies pile up…dead men and beautiful women…the Raider wonders what kind of Latin hell he’s gotten himself into, and just who or what is the mysterious Consummata?

Begun by mystery master MICKEY SPILLANE in the late 1960s and completed four decades later by his buddy MAX ALLAN COLLINS (Road to Perdition), The Consummata is the long-awaited follow-up to Spillane’s bestseller The Delta Factor — a breathtaking tale of treachery, sensuality, and violence, showcasing two giants of crime fiction at their pulse-pounding, two-fisted best.

The first thing I noticed was how much I liked the character of Morgan.  Morgan is a Robinhood type thief that worries about the good of others as much as the good of his own pocketbook.  I love the fact that every time that a “bad” guy goes after Morgan, the henchman has an “accident” that takes him out of the picture.

Mickey Spillane created a great character and Max Allan Collins has done an exceptional job of finishing his tale.  The Consummata is a non-stop thrill ride and a darn good time.  I started the book interested and ended it enthralled.  If you like thrillers and mystery novels with a good guy on the wrong side of the law, The Consummata and Morgan “the Raider” are your match.

You can get The Consummata from Amazon.com below.