Top 8 Coolest cars of the Geekdom

When you need to kick ass and take names fast, the best way to do it is in a iconic car. One that that goes down a signature – no, more like a character itself. Here they are brought to life.

#8 The ’67 Chevy Impala from SUPERNATURAL 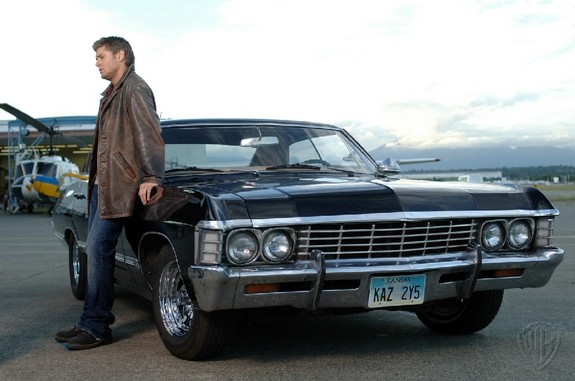 Passed on from John Winchester to his sons, Sam and Dean, this car is a second generation monster killing machine. The american Chevy is well suited for the wild west-like tv show. A wild steed the boys rely on as they ride into battle. The car became so important that in final episode of season 5 (ment to be the last episode ever) it was written as the “most important object” in the universe. Proven true as it was what saved Sam from being possessed by the devil. Now that is a car. 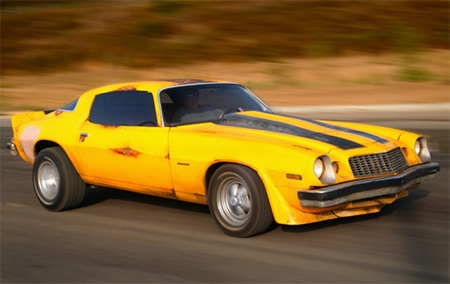 Your first car should always be a great memory. In the first Transformers movie, young Sam got one hell of a memory when he picked up this yellow scrap at a used car lot. But soon it would lead him on and epic battle between two techo-organic alien races bent one using Earth as it’s battle ground. Bummblebee served as the youngest character with his comedic, but often annoying radio voice.

Bonus Features : Can transform at will into a three story tall battle mecha, complete with blasters.

#7 The Mach 5 from SPEED RACER 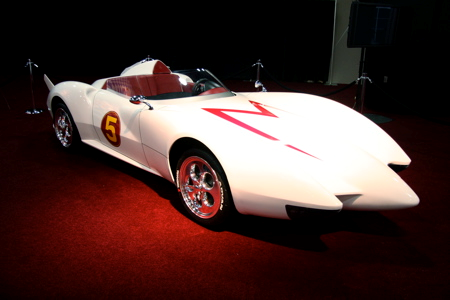 Built and driven by a long line of Japanese auto-mechanics, the Mach 5 out races the bad guys who are constantly trying to sabotage the honerable game of racing. Its’ driver, Speed Racer steers it like it was a part of him, and drives this car right into the winners circle and history books time and time again!

#6 The Mystery Machine from SCOOBY-DOO 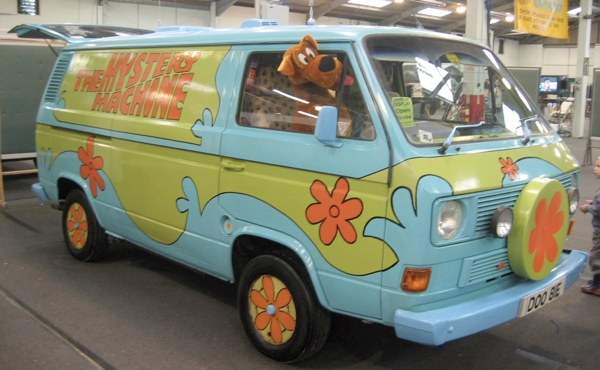 When driving around in swamps looking for ghosts you need a great get away vehicle with four wheel drive, just in case you get stuck in some ectoplasm. The Scooby gang chose well in this classic VW Bus. With room for four plus a great dane you have the space you need for cross country travel. Painted in bright colors so it’s always easy to spot in those fog covered areas, and driven but thier fearless leader Fred, the Mystery Machine is more of a home to the gang than a car. 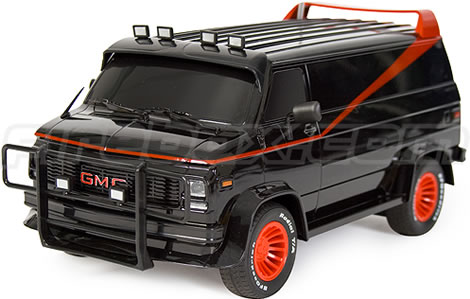 This monster rolls down the block you know the shit has hit the fan. Loaded with four, large ex-military men armed to the teeth and ready to kick some tail. With it’s signature red stripe and fin, it rolled out in the ’80s television show and even made a appearence in the blockbuster movie adaptation. 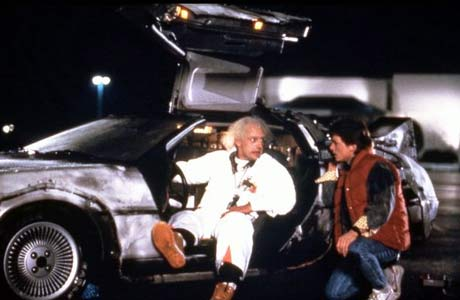 Everyone needs a car that will take you places. The Delorean time machine, created by Emmit Brown, does just that. Taking young Marty Mcfly to help the teenage version of his parents, all the way to the future, to help his own kids, and even back to the wild west to stage a classic cowboy rescue of his mentor Doc Brown.  Though, at times due to it’s need for 1.21 gigawatts and to reach 88 MPH has been hindering to young McFly, Doc Brown had altered his machine time and again to fit whatever needs they require. A truely adaptive machine with a truely awaesome friendship attached to it. 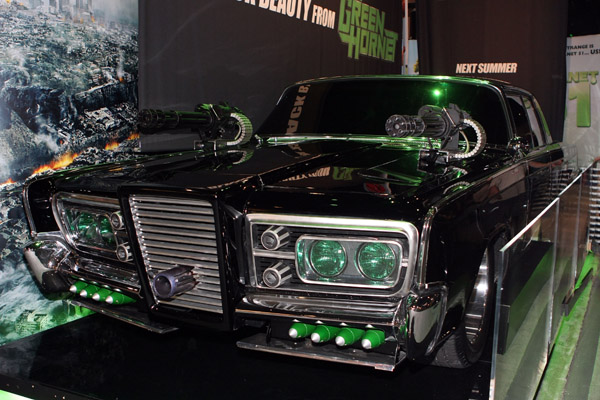 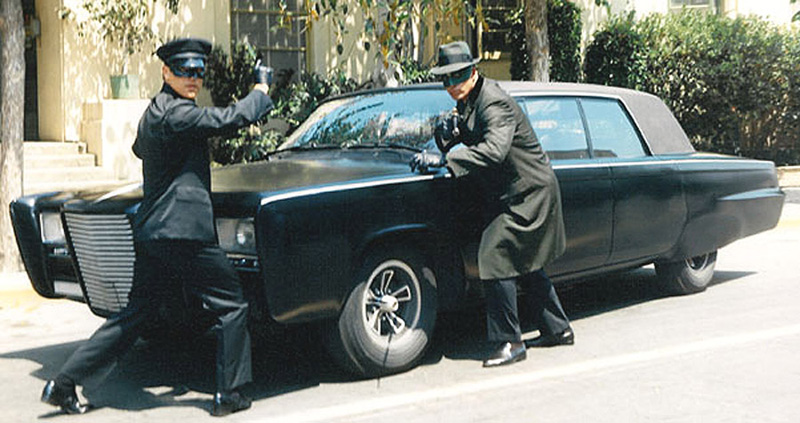 Built and upkept by mechanic/butler/sickkick,  Kato this black of night luxery car became a rolling beacon of destruction when it hit the streets. The Green Hornet became a hero in villians clothing every night, and he needed a sinister car to match. With an arsenal built in to every corner and it’s wild green headlights, mobsters of the underwolrd to notice as it toured the city. With Kato behind the wheel, he treated it like every other weapon in his hands . . . deadly! 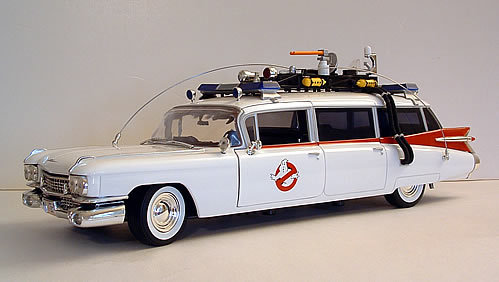 When moving into a old busterd up firehouse, the Ghostbusters found this old buster up emergency ambulance. Some might sell it, some might toss it for spare parts, but not these heroes. They turn this baby into a rolling ghost trapping machine! Driven by no particular teammate, it has become as important a tool as the nutron packs or ghost traps. With it’s white and red finish and classic car shapt it stands out from many iconic cars and will continue to do so.

Bonus Features :  holdster in back for packs, overhead ghost tracker, Siren loud enough to go on the soundtrack. 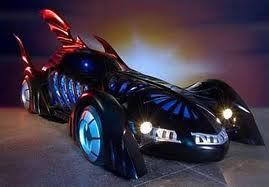 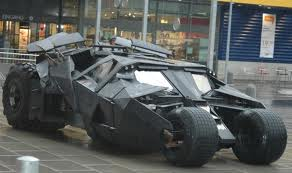 Whether you are 6 or 60 at one time of another you have wanted this car. It didn’t matter what mighty version touched your life, this car is the ultimate vehicle. From Adam West in the bat shaped, double domed, car with red pinstripping, to Christian Bales, massive tank roller, this car has alot to offer. No other car has more adventure, danger, and hope than the classic Batmobile. Every new TV show and movie (animated or live action) gave us a new car to drool over with new features.

I travel the US attending every convention I can! Refairs in Wichita to ComicCons in Chicago. The Anime Fests and one day College Campus Sci-Fi days. I sell nerd-flavored t-shirts and animal hats(think Molly from Runaways) along with random Steampunk. My posts will be about a few of these cons and how YOU as a geek should prepare for them!
View all posts by Katherine Hollingsworth →
Tagged  cars, top 8.
Bookmark the permalink.