OFF THE RACK / 52 Pickup: The DC Shuffle – Aquaman 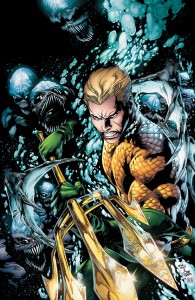 Since DC’s New 52 Reboot I had been ignoring DC books when perusing the comic shop racks, for the obvious reason that I was going to be writing about a host of the issues regardless.  But as Brandon and I come upon our final week of reviews for the reboot it seems only fitting to have a little crossover.

That’s not to say there aren’t plenty of interesting books out there this week.  Trust me when I tell you it’s almost always a hard decision to whittle down from the three or four potential reads to the one I finally go with.  Each book always has its own distinct qualities and in the case of Aquaman I was drawn in on lots of levels.

For starters, the cover is really intense.  Admittedly I’ve never read an ongoing Aquaman series, so I couldn’t tell you if issue one’s cover is commonplace or not.  But I can tell you that it is eye catching.  Arthur Curry (Aquaman) battle-posed with vile creatures surrounding him; even gleaming off his golden trident.

As you read through the book it becomes clear that the cover is indicative of the fact that Geoff Johns, writer of the issue, is intent on making one thing perfectly clear: Aquaman is a badass.

The 70s & 80s television series Super Friends made Aquaman look like a whale ridding, fish chatting chump.  These sentiments and opinions on the character have lasted for decades since.  But in truth Aquaman is as strong as Superman, is King of Atlantis and protector of the all the oceans of the earth. 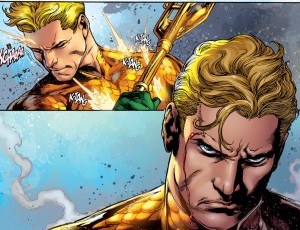 During the action sequence early on in the issue criminals are shooting high powered rifles at Aquaman and the bullets are just ricocheting off him.  One bullet strikes him in the head, and though we see a small run of blood coming from the area, it’s no more than a small child’s skinned knee.  And with a look that calls out, “you made me bleed my own blood!” (Nelson Muntz – Simpsons) he sends the criminal flying through the air and into the windshield of a nearby police car. 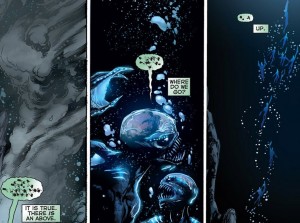 Not to be singularly focused, as if Geoff Johns could ever be accused of that, the story’s opening scenes and several callback scenes throughout the issue focus on a new threat to Earth: both above and below the ocean’s surface. 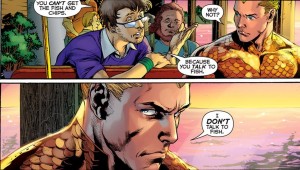 Aquaman issue one explores the dynamic of how Aquaman, as a hero, is viewed by the general public.  At one point he goes to a seafood restaurant for lunch and one person tries to interview him for a blog and the questions are not only insulting but ignorant.  But that’s just how it is for Aquaman.

I have a feeling that the tide is rolling out on the old view of this character, taking with it all the veiled cynicism and sarcastic comments.

Since this is a review with two masters, each using a different grading scale, it could have been confusing to wrap this up.  Thankfully Aquaman surpassed expectations and has earned an A for ACE grade!

No store review this week gals and guys.  Check back next week when I plan to have a brand new store to tell you all about!