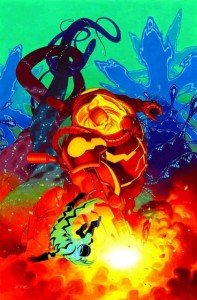 As DC continues its New 52 Reboot I am almost forced to look outside their realm to find books that interest me since I am already dedicated to read those titles.  And, uncanny as it may be, I find myself once again interested in a Marvel title.

This time the book called out to the 90s Tim who remembers Age of Apocalypse with great fondness.  First, the character on the cover holds a striking resemblance to Nemesis, a villain from that alternate reality.  That’s what got me to pick up the book initially.  But once inside I was completely sucked in.

Marvel has always been good about having a recap page, which is perfect for what this column is going for.  Since this story is in the midst of a story arc it catches the reader up.  This is good for jump-on readers (like myself) and for readers who partake of many books monthly and may have forgotten the specifics of this title in the weeks since they put away the last issue. 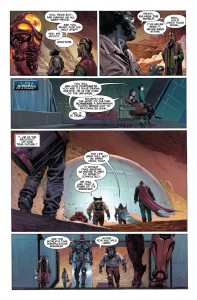 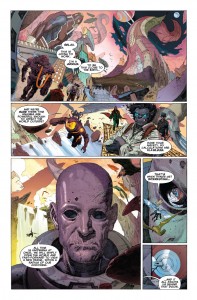 Second, the internal art is amazing.  Flat out, stunning.  Jerome Opeña has an outstanding feel for the environment of the story and characters.  I don’t normally comment on art, since as a writer I feel less than qualified to make specific judgments if I like (or more often when I don’t like) the art of a book, but this is inarguably good.

Third, the dynamic of the characters is solid.  Granted, it’s issue fifteen, so it would be a little bit strange if the characters didn’t have a natural rapport at this point.

Four, the inside cover promises the reader Wolverine, indicating he’s part of the team/story.  He never appears and to be honest, the story is richer because it.  Wolverine, in a lot of cases, is kind of like Superman…wait, it’s ok stay with me.  When Wolverine shows up in a battle your side is almost completely assured of victory (so long as the opponent isn’t a mentally functional Magneto who can completely neutralize him).  Superman is much the same (so long as Metallo isn’t involved).

Uncanny X-Force has genuinely impressed me and made me want to pick up the other issues of this story arc and continue to read it going forward.  For that and all the reasons I listed above I give Uncanny X-Force a grade of A.

I hope you enjoyed this week’s OFF THE RACK.  Check back next Thursday for an all-new review!

Store Review: the location A Skeleton Story was purchased at is called Dreamland Comics located in Schaumburg, IL.  The store is small, and a bit cramped because in today’s market if you’re not catering to everyone you’re catering to no one.  When you first walk in you are greeted by action figured on the wall immediately proceeded by the “new comic” racks.  Among the “new comics” is a healthy dose of independent issues to go along with the mainstream staples.  In the middle there are free-standing shelves stacked with graphic novels.  In the back are the supplies and along the opposite wall from the “new comic” racks are back-issues and collectibles.  Altogether Dreamland is a quality comic shop that I would recommend to anyone.