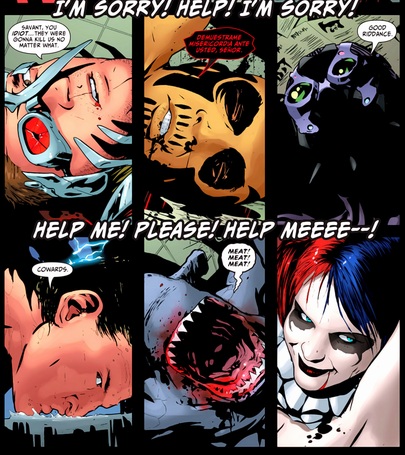 This image really sums up the book, twisted.

I love the Suicide Squad, I even like the lame period when the Atom was on the team, I also love Secret Six, It’s probably one of the best comics I’ve ever read. So, what if you took the great dynamic of characters from a book like Secret Six and mixed it with the structure of the Suicide Squad then mix in some very dark writing, what do you get? Solid Gold

The story started dark, and just kept getting darker, it was crazy. Suicide Squad never let up on how serious it was, sure the characters cracked jokes, but it was only to increase the darkness, this was like Vertigo Suicide Squad. Adam Glass who was best known for Luke Cage Noir and various Deadpool books really went all out. Federico Dallocchio, who drew the awesome Starcraft series from 2009, creates dark and gritty versions of characters we know and some we don’t.

The story was a great set up for future stories, I know how most the main cast thinks and why they are here, I also know that the missions that they are sent on are only the deadliest, a great start to what I imagine will be a fantastic series. The big uproar right now was the reveal of Amanda Waller, not the CCH Pounder that we have all grown to love, but a young, busty, thin Waller and frankly I don’t like it. I understand that being overweight isn’t a good thing, and they have slimmed down The Blob already can’t Waller stay curvy?

I am really excited for this series, I want to see more, I can’t wait to see what happens next! I drop an ACE on this book, and it narrowly lost out as my favorite of week three. What is my favorite? Wait and read to see!

So where oh where is the hooded woman? 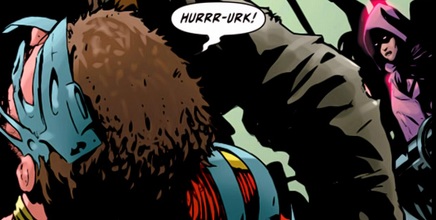 Why is she watching this? Sick bastard.

I'm one of the main contributors to 8 DAG and I take pride in my other job as Public/Staff relations. I'm a comics and movie junkie and I love to podcast. Follow me on Twitter @BrandoCop
View all posts by Brandon C. Williams →
Tagged  52 pickup, DC new 52, DC shuffle, review: comic, suicide squad.
Bookmark the permalink.