Geek Movie Review: Rise of the Planet of the Apes

Rise of the Planet of the Apes is one of those movies that you go into expecting a summer popcorn flick and leave shocked about how good it was. 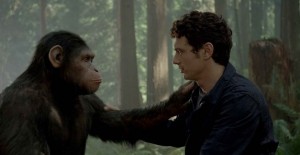 So.... i guess I'm gonna die soon, have fun ruling the planet buddy.

I was amazed, the action and graphics were spectacular sure, but what really blew me away was the story. Franco was the “star” but he played second banana to Andy Serkis’s Ceaser. The movie waste no time showing us the boring human stories, the ape action is at a 10 from scene one. Really the only time we see humans is to further the story, otherwise it’s the apes that control this movie. Although these are all CG apes you actually feel like they are real, the pull you in with a great story full of a great range of emotions from sadness, to happiness, to anger, and there is much anger. 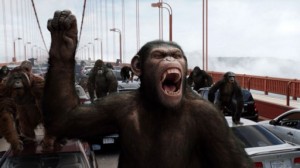 I'm gonna go ahead and give up, you guys uh..Win?

James Franco plays Will,  a young scientist struggling to find a cure for his fathers (John Lithgow) Alzheimers. We are introduced to some other humans as well, the beautiful Freido Pinto plays the love interest and shows us how useful an ape wingman can be. We also meet Brian Cox’x character and his son played by Tom Felton as crooked ape sanctuary workers. Through the entire movie the recurring villian is Jacobs played by the fantastic David Oyelowo, but of all the humans I was happiest to see my man Tyler Labine as Dr. Franklin, a chimp handler who becomes one of the most important people in the series, it’s a secret why though. 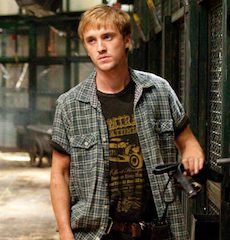 Who cares about the humans though? What we like t see is the genius level Ceaser and his mighty ape brigade. Buck, a gorilla, Maurice, a fellow signing circus orangutang, Rocket, a ferocius alpha male who quickly learns whos boss, and Koda, an old lab ape who doesn’t play around. 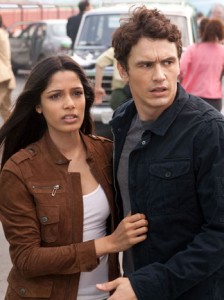 One of the few times having your monkey out at the zoo is a good thing.

These characters are who we follow through an amazing story full of raw emotion, goosebump causing scenes, and a miraculous story that leaves you wanting more. I give this film two opposable thumbs up.

Jesse’s Two Bits:  I agree with Brandon on pretty much everything about this movie.  It was a fantastic piece of cinematography.  Between amazing yet understated CGI elements and a lead character that you genuinely care for, Rise of the Planet of the Apes is a must see for everyone who’s not afraid of apes (if you are afraid of apes then it’s probably best for you to stay home; just a tip).

The one thing that struck me more than anything in this movie was the fact that a CGI ape could show as much emotion without speaking as all of his real life human counterparts could.  With a great cast and great direction Rise of the Planet of the Apes scores 9 out of 10 for me.  Go see it. Period.

PS  The title could have been a little better, but this is a pretty minor gripe.  Besides, the title gifted me the line I repeated over and over today…

I'm one of the main contributors to 8 DAG and I take pride in my other job as Public/Staff relations. I'm a comics and movie junkie and I love to podcast. Follow me on Twitter @BrandoCop
View all posts by Brandon C. Williams →
Tagged  CGI, freida pinto, james franco, planet of the apes, review movie, Rise of the planet of the apes.
Bookmark the permalink.