Alas, I come to the end of my review of the DC/Wildstorm book Planetary.  After my final look at the ongoing series last week I’m sure many of you were asking yourselves, “What about the one-shots!?”  Well, wonder no longer! 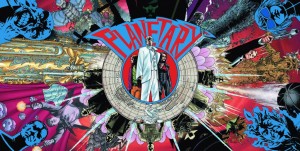 Planetary generated three one-shot issues, all of which were written by Ellis but each had a different artist team.  Two of the issues gave Ellis the opportunity to play around with some of DC’s most storied characters while the third was a crossover between Ellis’s two teams that lacked any real interaction between them.

I will review each book individually as a stand-alone story and grade it accordingly, for I truly see these stories as outside the normal events of the series but still staying very true to the idea of what Planetary is as a comic.  If for no other reason I shall review them in the order of their release.

Thus, I begin with: “Planetary/The Authority – Ruling the World”.

In a stark contradiction of the action-packed, in-the-moment style of super-humanity of The Authority and the observation-based, inaction nature of Planetary, ”Ruling the World” is that altogether unoriginal crossover where one team does something that causes the action/reaction of the other team. 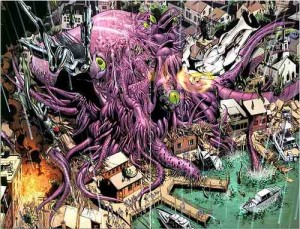 In this case, The Drummer touches something he shouldn’t have and then we’re off to the races.  And it touches off an engagement not often explored in comics: that of two super-teams existing in the same time and place.  Generally speaking, this is somewhat rare in comics today.  I can think back to crossovers with WildC.A.T.S. and CyberForce and the huge Marvel crossovers that involved all the teams, but that was the exception, the stories almost implied that they didn’t really exist in the same place but for this event they did.

Ruling the World explores the idea of how The Authority are the ones fighting the super beasts and Planetary are the ones that explore the how, why and where from behind the beasts.

We also get a glimpse into the history between Snow and Jenny Sparks. 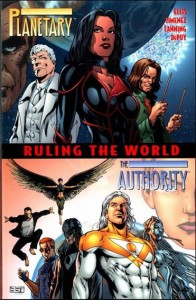 The story culminates in a back and forth, panel by panel, event that involves parallel Earth’s world-devastating robots and myriad interesting and cool events.

Overall, I very much enjoyed the story and felt that it was fitting for the first one-shot to involve both of Ellis’ monumentally successful teams, for that I rate it

True to form the advertisement in the back of the prestige first printing of Ruling the World is a one page “coming soon” ad for the Planetary/Batman crossover, but since it involved both Ellis and Cassaday, it clearly did not come out next.

Instead, we move on to: “Planetary/JLA – Terra Occulta”

In this storyline Ellis once again gets to play with the dark side of characters.  Much like he did in the ongoing series with The Four (the evil version of the Fantastic Four), here he sets the Planetary characters up as the evil villains. 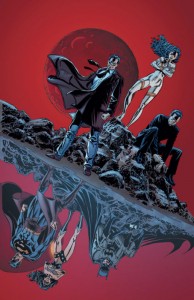 At this time in the universe none of DC’s “big three” had really come into their own.  The comic leads you to believe two possible reasons for this: first, that the characters are still relatively young and have not reached the maturity associated with their superhero personas.  Or second, that the world is so controlled and monitored by Planetary that they would simply be eliminated if they attempted to use their powers or abilities.

Much of the story involves Bruce Wayne bringing Diana Prince and Clark Kent together in order to fight back against the controlling interest of Planetary.  The interesting side note is this: once you’re able to read the final issue of the Planetary ongoing series you see how the Planetary in this story could actually come to pass at one point in the future, but this story came out in 2002 and the final issue wasn’t released until 2009.

The story is a bit contrite with Snow looking far too much like Lex Luthor.  One of the big three dies.  The fight scenes are almost… boring?  Which I guess is a pretty understandable event since Planetary has rarely had full-on battle action scenes.  Normally the battle starts, is implied as they move on to something else, and then is discussed after the fact.

The build up and the suspense are wonderful, Ellis is always prepared for that, but the play on villainy and some of the other parts don’t live up to expectations when you’re talking about having Planetary and Superman, Wonder Woman and Batman all together in one story.  For these reasons I give it a rating of

Lastly, we come to my favorite of the three one-shots: “Planetary/Batman: Night on Earth” 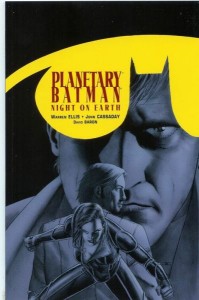 Here, for the last of the one-shots, Ellis teams up with Cassaday to bring a truly awesome story.  It pulls together pieces of known history from the Planetary universe by involving a character from City Zero.

The problem you run into with this story is that it clearly was meant to come out prior to Terra Occulta because it indicates that Planetary is a universe without Batman; additionally, it takes place at a time when Snow is still “new” to the team.

The team travels to Gotham City, where they meet members from the local office Dick Grayson and Jasper (who is essentially the Joker) and are in search of John Black, a descendent of City Zero.

Black has a strange, uncontrollable power: he can alter reality, transdimensionally, in a localized space.  Basically, if you think back to the snowflake existing in 196,833 dimensional space from issue one that Axel Brass and his cohorts created, a variation of that snowflake exists inside Black’s brain.  The team gets trapped in his bubble of dimension-hopping space and as the shifts occur they run into several versions of Batman.

This is incredibly and inarguably cool. 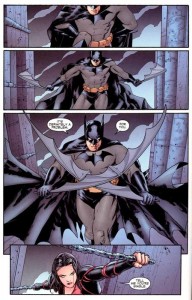 Slight spoiler alert: one of the dimension hops puts them in the “Adam West” Batman era, and the interaction between him and Jakita is priceless.  All told they encounter six different versions of Batman; I’ll let you have a crack and deciphering the era/style of them all.

The ending is a touching and moving portrayal of Batman and is certainly some of Ellis’ best writing.  For those reasons and everything I listed above I give it the highest rating of the three with

Next week I venture into a whole new comic!  I know, it’s hard to believe, right?