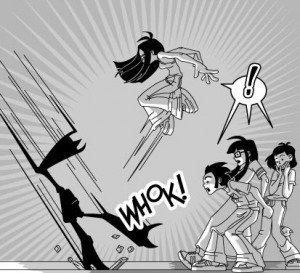 Welcome to this week’s edition of Bin Fodder!  In this installment I’ll be taking you into the world of Random Encounter, created by writer/illustrator Nicc Balce.  Random Encounter was produced by Viper Comics a company that is probably best known for releasing the very popular books Dead @ 17 and Middle Man. 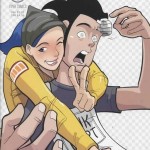 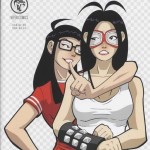 This four-part miniseries has something for everyone.  If you’re a geeky fanboy who loves “hot” anime-style comic book ladies, if you’re a fan of RPGs (Role Playing Games for you non-true nerds out there), or if you just enjoy a quality comic with an interesting and engaging story chock full of outrageous action and humor, then this is the book for you.

The high concept of Random Encounter is top notch.  Take three ordinary people and put them in an extraordinary situation with monsters and crazy action sequences.  Throw in a heroine who has the innate ability to fight said monsters but lacks the conscious memory of how she can or even why she’s doing it.  Mix it all together with some RPG style overtones and you get an exceptional story.

Random Encounter has four main characters: Migo, the Kwik Mart clerk who turns out to be more than meets the eye.  Mica, who dates Migo and basically lives at the Kwik Mart, who also turns out to have powers that are not entirely known to her.  Mona, plays the role of the overbearing, controlling friend of Migo and Mica who takes photos and dreams of glory.  And Goggles Girl is the heroine who has lost her memory after landing on the roof of the Kwik Mart.

The first issue starts out with Migo, Mica and Mona doing what it would seem they are always doing, hanging out at the Kwik Mart playing video games and watching television.  But a random encounter introduces Goggles Girl and an inky monster creature that attacks her, Migo, and Mona as they try and help.  Acting on what turns out to be instinct Goggles Girl fights off and eventually destroys the creature, but not before Migo is injured.

He’s rushed to the hospital where, after coming around from his head injury, he is attacked by another inky creature.  This one ends up possessing one of the nurses in order to continue its assault but Migo is able to fight it off with the help of Gummy.  The introduction of Gummy brings along with it the detailed explanation of what is truly going on in the story.

Gummy is a “Nede Harvester”, and once again I find the internet lacking for any kind of proper definition of what this is so I will do so here.  Nede is referred to as the “Tree of Life” and its leaves have the power to heal once allowed to properly dry.  The leaves are black when they fall off

and turn white when they dry

.  The leaves can also be used to create “Nede Cards” which, when placed inside an item, can add special powers to said items.  Gummy explains all this to Migo along with informing him as to that the monsters are called Bindlings and that they are released by Nede trees as a defense mechanism when leaves have been stolen.  The Bindlings start out as level one monsters (the kind seen in the first two issues) but then they can latch on to another tree or combine together to upgrade themselves to become larger and more dangerous creatures (as is seen in the last two issues). 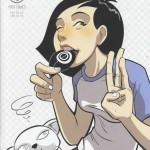 Migo and Gummy return to the Kwik Mart to find Goggles Girl tangling with one of the larger creatures while Mona looks on taking photos of her skimpy outfit hoping to become rich and famous from it. After Goggles Girl gets knocked out Gummy and Migo step in to take on the monster.  It’s during this scene that the truth of Migo’s importance and ability comes out.  He has powers, he was simply unaware of them, but a kiss from Gummy brings them out.  After the kiss his right hand enlarges and his punches deal out a massive amount of damage.  In the end Migo, Gummy and Goggles Girl work together to take down the creature and then together with Mona and Mica leave town. 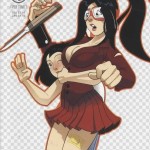 The story ends very open ended leaving the possibility for future adventures but as of yet none have come to fruition. 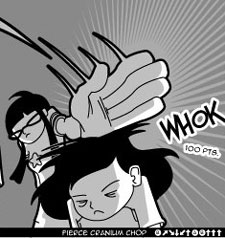 The only negative comment I can make on the story has to do with the writing and the fact that Balce starts something and then seems to give up on it.  The first issue contains interesting little notations in the form of videogame style directional-pad use and buttons to push to achieve some of the action/fight moves that occur.  But much the same as Dade Murphy’s techno-visions in Hackers, these notations just fade away, which was somewhat sad to see, because I thought it to be a very cool concept and thought it added an interesting quality to the story.  It reminded me of how Blue Monday made notations throughout of recommended music for that part of the issue.

Overall Random Encounter has a great story with really cool art.  It has enough of an anime/manga feel to draw in that crowd of fans but not so much as to turn off those who don’t dig on that style.  As a complete package this story rates a

This is a book that’s definitely worth your time and your money, especially since at the time of this article the trade for Random Encounter can be purchased through the Viper Comics Bookstore for a scant $0.99!  Just click on the link and search for the title.