Hello!  Welcome to this week’s edition of Bin Fodder.  Today I’m dipping back into the mainstream to talk about Marvel Comic’s 1602.  I do this for two reasons: first, because it’s Neil Gaiman, one of comics’ most celebrated indie writers with books like Sandman and Books of Magic to his credit. Gaiman, like me, has dipped his toe in the mainstream waters before having done spot-writing on Batman and Detective Comics.  He teamed with artist Andy Kubert of the famous Kubert family of artists to create Marvel 1602. And second, because I have yet to review a Marvel book and it seemed only fitting that I do so. 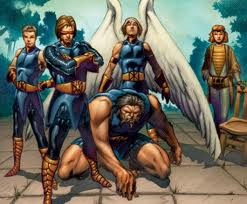 The story of Marvel 1602 sets many of Marvel’s classic characters, including the Original X-Men, the Fantastic Four and 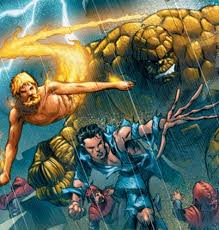 Daredevil (Matt Murdoch), in early-modern Europe.  The premise for the existence of these characters is divulged by the Watcher Uatu to Dr. Steven Strange through a very Gaiman-esque style of linguistics magic.  Essentially, a hero from modern times (our present) is displaced into the past which creates a rip in the time/space continuum.  The Universe, in an effort of self-preservation, sets in motion the events which establish a force strong enough to stem the tide and fix the problem (the classic hero characters).  There’s just one problem with this: he rip in time takes place fifteen years prior to the beginning of the story and many if not all of the hero’s are far older than fifteen.  But, it’s comics, so we let that go and move on. In an effort not to give away the ending (since I am not one to have spoilers in my articles) I will simply say that working together the combined forces of the X-Men, the Fantastic Four and many others save the universe, as is to be expected.

To go along with Gaiman’s well-known and much ballyhooed style of writing, Kubert does an outstanding job of designing the characters to fit in with the motif of their surroundings.  In many ways Marvel 1602 is the company’s attempt at doing what DC Comics did back in the mid-nineties with Kingdom Come stylistically if not symbolically, which is to show very established characters in new forms and in a new light.  With Richard Isanove doing the digital illustration which, of course, pales in comparison to the paintings of Alex Ross, nonetheless is magnificent in its own right.

In the world of Marvel 1602 there are two villains, the first and main is Otto von Doom (a.k.a. Dr. Doom) who is still set up as the iron-fisted ruler

of Latveria.  The second, and much more minor, is Richard of Scotland, who sees fit to supplant the queen and rule all of the United Kingdom.  Doom, much like his modern counterpart, is desirous of knowledge and bent on ruling the world.  In this alternate reality he has captured the Fantastic Four and uses fear of reprisal against the others to force Richard Reed (a.k.a. Mr. Fantastic) into aiding in his scientific endeavors.

Other characters play large roles as well, such as Sir Nicholas Fury (a.k.a. Nick Fury), Thor and Peter Parquagh (a.k.a. Spiderman), though he does not assume the role of Spiderman until volume two of the story (not covered here).  And some make very minor appearances such as Sister Wanda (a.k.a. Scarlet Witch) and her brother Petros (a.k.a. Quicksilver) as well as Vulture Fliers, who are in fact assassins who appear to be genetically engineered clones.

Marvel 1602 does a good job of taking the reader into that period of time with colloquial terminology and staunch religious doctrines.  Where the story falls a little flat is, as stated previously, in the timeline but also in the use of the characters.  Gaiman does what I think many of us sometimes wish to see, superheroes acting super, but he shows his lack of experience in the field during this story.  Gaiman has too many characters for an eight-issue miniseries and it shows in the lack of time that the majority of them see action.  I can see where he was compelled to include the Fantastic Four in the story since it could prove somewhat more difficult to have the X-Men battle a villain they’ve not regularly, if ever, faced.  However, that’s the fun of alternate reality stories!  Go outside the norm, go beyond comfort levels!  I don’t know if I am to blame Marvel Comics or if I am to blame Gaiman for this fault, so I shall blame them both equally.  The story of Marvel 1602 could have been so much greater had he not tried to squeeze in so much.

Overall, the art and the dialogue of Marvel 1602 rate four stars, but lack of imagination and faith in the readership brings that down.  In the end I give it