The Walking Dead Week 5:I’d Rather Die Than Be Dead! 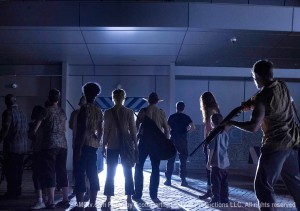 The episode starts with our little group of survivors deciding to go to the CDC (Center for Disease Control) to help one of their own. One of the most enduring qualities of Rick is his stupidity, he has blind faith in things that may not be there, a strange dedication to what is right, and the inability to put two and two together.

Dale and Andrea have a great conversation about death and how important Amy was to them. Carol decides to put Daryl’s pick axe through her abusive husband Ed’s head, and at first you see the look of love lost, but quickly it changes into a different emotion, rage, rage over years of abuse, rage over losing her protection, and rage over her whole life being shit. Shane had an intense moment and showed his true colors, and good ol’ Dale saw it all.

(Side note! Did anyone else see the creepy Robert Downey JR. Mr. Peanut commercial?)

As the plan came together we lost a few more people, but not in the violent neck biting way from last episode. A simple scene of driving peacefully to powerful music has is cut short because of that pesky hose we were warned about.

In the comics Jim was one of my favorite characters, and he had an epic sendoff, the slow death leading to the decision to have him left to turn into a walker, it was heartbreaking, powerful, and was a perfect example of why this is one of the best shows on tv.It’s rare that a person gets to attend their funeral while alive, but Jim got just that.

What the hell is going down? We never learn about the virus in the comic! Why are we given this information? I am enraged and relieved at the same time, straying from the comic was exciting, since the story was going in directions I’ve never seen, but I was angry to see the background of the virus, since the comic tried so hard to not show it.

The CDC was a boiling point for the survivors, Rick lost his cool for the first time and the group was ready to forget Rick as the leader, and all of this was to much for the CDC worker was to much so he let the survivors in, we have no way of finding out if this was good idea or not, so we will have to continue to watch!