Bioshock Infinite takes us out of water and into the sky 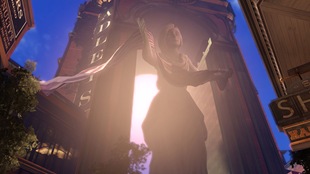 Well, this is a drastic change of environment. Bioshock Infinite, the newly announced third game in the Bioshock series, and first in the time line if this is set in the same universe, is about a city in the sky, Columbia. And it’s set in 1912.

Bioshock Infinite is definitely not a sequel in the traditional sense–more like an addition, or a re-imagining, for the franchise. It’s due to come out in 2012 on the PC, XBox 360 and PS3.

Instead of getting punched in the face with the dark mood of the art deco, corpse-filled Rapture, we’re getting a good look at a whole new art style: the idealized Normal Rockwell America. Everything looks clean, perfect, in its place. As the lower depths of the city are explored, the style goes more art noveau.

In this game your character has a name and a backstory, no mysteries there. Since this is a living, thriving city, you’ll be walking around in structurally sound places, but you won’t be running into a fight every time you see someone; although, consider the fact that it’s a weapon-filled city, you will get into plenty of fights. Columbia was a city built on ideals (much like Rapture) that floated around the world until it was caught up in a violent incident (much like Rapture), and then it disappeared, with its location only known to few people on the ground.

BioShock Infinite is a first-person shooter currently in development at Irrational Games, the studio behind the original BioShock (which sold over 4 million units worldwide). Set in 1912, BioShock Infinite introduces an entirely new narrative and gameplay experience that lifts players out of the familiar confines of Rapture and rockets them to Columbia, an immense city in the sky. Former Pinkerton agent Booker DeWitt has been sent to rescue Elizabeth, a young woman imprisoned in Columbia since childhood. Booker develops a relationship with Elizabeth, augmenting his abilities with hers so the pair may escape from a city that is literally falling from the sky. DeWitt must learn to fight foes in high-speed Sky-Line battles, engage in combat both indoors and amongst the clouds, and harness the power of dozens of new weapons and abilities.

From the information put out so far, it looks like the folks over at Irrational Games are keeping the overall feel of the franchise in this game. Once you get past the initial shock that this isn’t Rapture yet still retains the title “Bioshock” in its name, it looks like this will be a really interesting game. When some of the gameplay footage gets out we’ll really get to speculate on what kind of connections the two cities have. For now, take a look at the trailer. It feels like Bioshock, just doesn’t really look like what we’re used to.

Visit the official Bioshock Infinite site for something pretty to look at. You can download the trailer from there. I highly suggest you go to the official Sony Playstation blog to read an in depth interview with Ken Levine, creative director of Irrational Games, in which he talks about details of the game, and some of the inspiration behind it. And, one last interesting note, Irrational Games was the studio behind Bioshock 1, but not involved in Bioshock 2, so it’s nice to see the studio that brought us the amazing original is the main player behind this game.