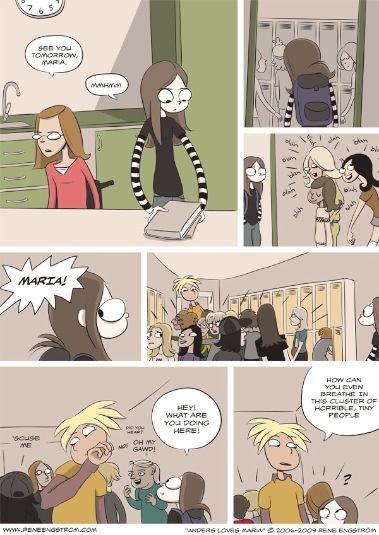 Anders Loves Maria is a completed (mostly NSFW) comic, and it’s what a lot of people call a “slice of life” story. Even though I’ve known about this comic for a couple years now, I didn’t read it until it ended earlier this year.From the name you can figure out it’s about a guy named Anders that loves a girl named Maria in modern day Sweden. Early on it’s established that Maria and Anders are going to have a child together. The comic begins with the conception and ends with the birth. Each character’s history is told in the comic through flashbacks and stories, so the comic constantly jumps from current day to the past.

There’s nudity, sex, adult situations, adult language, and a varied art style, some of it being computer generated and some of it being watercolor or more sketchy. This particular story can go from light-hearted to serious in a matter of one page, and it works. Anders is not the perfect main character, he’s full of screw ups and kind of a bastard at times, but in the end you mostly want to like him.

Start at the first comic here: Page 1
Or look at the archives here: Archives

If you go to the main page of the website you will see the very last page, and it’s a bit spoiler-ish of the end.