Happy 4th AmeriGeeks, I’ve compiled a list of the most red white and blue heroes to ever fight for America. 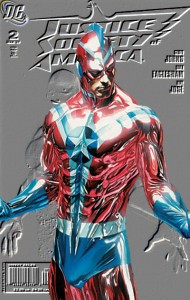 Pictured here is the third in the “Steel” line Commander Steel, a similarly dressed WWII hero is his grandfather while Steel (not the black superman or shaq) was his cousin. he has enormous strength that is tempered by wearing a suit made of — you guessed it, steel. 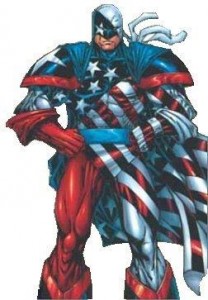 Although in the amazing comic Rising Stars patriot is bad guy he redeems himself by sacrificing himself to save the series hero after taking all but one nuclear weapons away from the Earth. Turns out he was being mind controlled by the real bad guys. 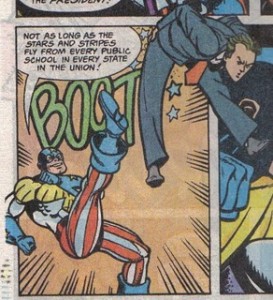 Created as a parody of Captain America the General here outranks him. Under that mask hides a secret, an elderly man with a bowl cut who can become General Glory. 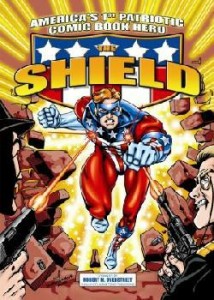 The corny Archie comics hero, The Shield was technically the first to wear the red, white, and blue as a super hero. With invulnerability and the ability to jump really far I would use my face as shield too. 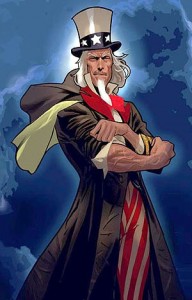 Didn’t know U.S was a super hero didja? Well he is and he leads the Freedom Fighters, an all American team with real life problems. U.S is the embodiment of the American spirit and has greater strength and resilience based on how patriotic Americans are. 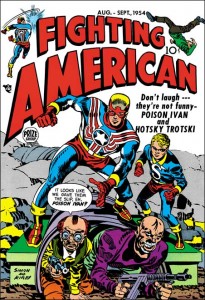 A Kirby creation (comic nerds know what that means) some consider this a Captain America rip off, and although the character was much more light hearted in the early days of the cold war, in the 90’s he was turned into a bullet chewing bad ass. The comic failed in both eras. 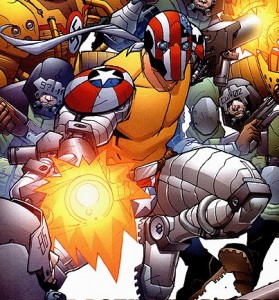 Originally a Captain America like hero with enhanced attributes SuperPatriot got all kinds of bad ass after Mako the shark man bit off his arms legs and half his face. reborn as a super cyborg the once values centric character became much more serious and dark. 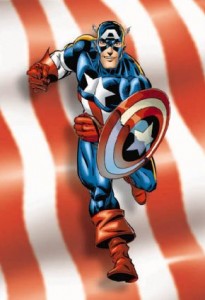 The most famous American in comics, Steve Rogers was a scrawny artist before being turned into the Marvel worlds greatest leader. Not the motorcycle riding bad ass in easy rider, or the most modern hero, many have tried to copy him, but no one comes close to the popularity of Cap.

I'm one of the main contributors to 8 DAG and I take pride in my other job as Public/Staff relations. I'm a comics and movie junkie and I love to podcast. Follow me on Twitter @BrandoCop
View all posts by Brandon C. Williams →
Tagged  4th of july, lists, patriots, superheroes.
Bookmark the permalink.