Drunken WoW player chokes his mom, gets shot in the head. 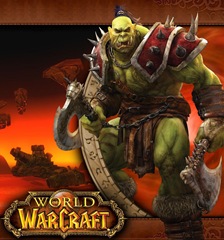 James Swan is 27 and lives with his grandpa, mother and five young children. He likes to play World of Warcraft and sometimes get drunk while doing so.

On one of those nights his mother asked him turn the volume down at around 10 p.m. so everyone could sleep peacefully. He didn’t. She asked again and this made him angry. He proceeded to grab his mother by the hair and throw her onto the bed. His little brother tried to help the mother, James did the same thing to him.

His mother managed to run to the kitchen and grab the phone. James decided to rip the phone from the wall because of his WoW-induced rage and then proceeded to smash his head through the drywall to prove some kind of point. (Was it, “Hey look, I get unreasonably angry over little things and now I will hurt everything!!”)

A bullet grazed James’ head and went out a window.

James was taken to the hospital where he refused medical treatment and was promptly arrested for the assault.

I don’t know where to start with the commentary that’s running through my head, so I’ll type out the one that is the most prevalent: CRAZY MAN NEEDS A STRAIGHT JACKET.