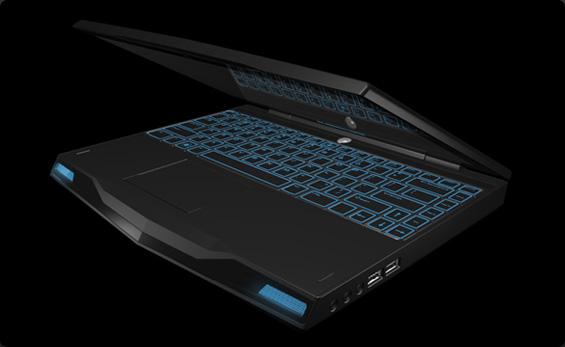 What if your netbook could play Call of Duty at 30fps at a 720p HD resolution and looked like a galaxy tripping craft from beyond the milky way?

If that were the case then you wouldn’t have a netbook at all would you?  While not a netbook, the Alienware m11x is only an inch bigger than one and does all of these wondrous things.  Dell (who owns Alienware) says that the m11x is the most powerful notebook under 15 inches; I for one believe them whole heartedly.(This little beauty was found lurking in the geek infested show floors of CES.)

If you aren’t looking for a gaming laptop then no matter how small the m11x is, it won’t appeal to you.  There is no mistaking this machine as anything  but Alienware.  From the stealth bomber stylings to the multi-color keyboard backlingting and LEDs behind the thermal grates the m11x tells the world, “I look small, but I play hard.”

First impressions are that the case is a little too plastic-y and the screen would look really nice with a glass front but these things don’t take away from the m11x.  While most notebooks it’s size weigh in pretty light; the m11x packs a rather hefty 4 pounds and change (hey I bet body builders don’t exactly float like feathers on the breeze do they).

There’s also something to be said about a machine with plenty of holes to put things in…
I’m not sure exact what would be said but I’m sure there’s something.  The m11x has 3 USB, an HDMI, DisplayPort, mini-Firewire, VGA and just so it has most every port imaginable Dell has added a SIM slot as well for that broadband on the go.  I for one am no fan of mirror finished track pads and flat keyboards and the m11x has neither.  The texture of the track pad seems pretty nice and the keys on the keyboard have curve to them to fit your fingers.

Tech specs include an 8-cell lithium ion polymer battery, an energy efficient Core2Duo, and a 1Gb Nvidia 335m Graphics card.  It won’t run COD full specs, but it will look darn crispy all the same.

“Are there any cons or have you just drank the Dell koolaid,” you may ask.  Yes there are somethings about the m11x that vex me; one being the non-removable battery.  I know this is starting to catch on in the notebook realm (starting with Apple of course) but I am on the road so much that I have three batteries for my laptop and while the third never gets used, the first and second are constant residents in my laptop’s life.  That being said Dell quotes the battery life of the m11x as being 6.5 hours of casual use and 2 hours of full on gaming (because I’m going to buy an alienware laptop for casual use * sarcasm*).

What kind of “limb trade-in plan” is Dell going to have so that I can afford one of these “little monsters” (good movie, geek stuff don’t ask)?  That is what I would have to call the best part; maxed out this little beauty will run you $1000 or less (Dell won’t nail down a price till the m11x releases).

So what say ye geeks?  Does the thought of an 11-inch gaming notebook interest you?  If I have the dead president flash cards in the bank when this beast hits the market it might just have to join me in my plot for world domination…
Or at least LAN party domination.

Want more pics?  Head over to  Gizmodo to see their CES pics of the M11X.

Photo property of Alienware and Dell

A small time blogger with big time dreams and a love for everything geek.
View all posts by Jesse (The Pen of Doom) →
Tagged  alienware, dell, displayport, gaming, m11x, News, notebook, tech.
Bookmark the permalink.