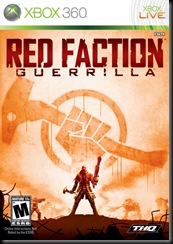 Systems: XBOX 360, PS3, PC
Notes for the parents: This game contains graphic depictions of violence and contains graphic language. Not for young children.
Visuals: In a nutshell… Beautiful. Atmospheric dust and weather patterns make the environments in RFG breathtaking. I found myself climbing to the tallest cliff and looking out over the landscape. Bullet impacts and explosions are very realistic. When you bring down a building or a bridge you see every crack start to form and dust fall from stressed parts of the structure right before it gives and falls into a pile of ruble. All of these points added together makes destruction just that much more fun.
Music: The music in RFG, like most games, changes with the tension of the situation. Nothing too special here. Standard orchestra compositions in various flavors set the mood of the Martian landscape.
Controls: Weapon selection is excellent, hold the right button and y-b-a-x each are mapped to a weapon (you can switch what weapon is mapped to what key at the safe-house). Driving controls feel smooth as can be. All around RFG gets the concept of an easy to use and remember control scheme.
Story: You are Alec Mason, your brother was a member of the Red Faction (a rebel group fighting for the freedom of mars). After your brothers death at the hands of the EDF or Earth Defense Force you join the fight with your hammer in hand. The game follows you through your missions to destroy the EDF’s presence on mars.
Game Play: Here’s the exciting part. RFG has a 99% destructible environments and is open world and is open ended and is a big game world and…
I guess I was rambling a bit. Like I said RFG is open world so when you’re not in the mood to partake in a mission for the Red Faction you can find random structures to decimate with any number of structure crumbling weapons. Another great this is that when the game is over it’s only just begun. There are an amazing number of missions that stay open even after the last Red Faction mission is completed so the fun never ends. There are plenty of weapon upgrades throughout the course of the game (you pickup scrap from demolished buildings and vehicles then spend it on upgrades).
Final Answer: Red Faction: Guerrilla is by far a buy for anyone looking to sink a lot of time into a completely fun game. This game will provide hours of destructive fun not only with it’s missions and story but also with it’s open world environment. Taking out the main supports of a building with a sledge hammer and then bringing it down to the ground never gets old. Buy Buy Buy.
Jesse’s Rating : 9.75
Great game play, Hours of destructive fun, Plenty of structures to destroy, Addictive at best

A small time blogger with big time dreams and a love for everything geek.
View all posts by Jesse (The Pen of Doom) →
Tagged  PC, PS3, review: game, XBOX 360.
Bookmark the permalink.