Geek Girl Falls in Love with Superman All Over Again

I have to confess, I’ve loved Superman since I first saw Christopher Reeves’ bright blue eyes in Superman at the tender age of two, and for every VHS viewing after. It seems as though most of my earliest memories are geek related.

I loved Superman II, even hung in there for Superman III and IV: A Quest for Peace. A lot of that was due to my crush on Reeves, but a lot of it had to do with the character himself. While darker characters, with traumatic origins became popular in the mainstream, and while I certainly like these characters, there is something that is inherently pure and right about Superman that has not changed in 75 years.

And this is why Warner Bros. screwed up big time in their marketing of Man of Steel. My biggest complaint, in the months leading up to the movie was how dark it seemed- both in cinematography and in storyline. I (and other internet geeks) bemoaned the fact that Zack Snyder had decided to take the character in this direction, which was so clearly NOT a direction you could take Superman and still be true to the character. Trailers and images released before the movie seemed to hint at some sort of Justice League: The New Frontier type plot where the government had turned on heroes. 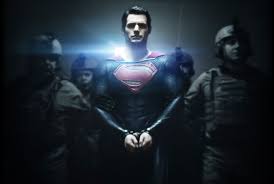 So imagine my surprise when I sat in the theatre today and saw none of the darkness the trailers and teasers had been marketing so hard.

Instead, what I found was a story that turned some classic stories on their heads but better yet, gave us something NEW. Now, some have complained about how Snyder and the writers, David S. Goyer and Christopher Nolan, have mucked about with the origin story. And to that I say what I seem to be saying a lot lately- get over it. This is not your father’s Krypton. Hell, it’s not even OUR Krypton (unless I slept through the part that explained why there are dragons on Krypton)  Nolan’s influence here is clearly seen in Krypton’s production design. This is not the white beacon of hope we usually see that turns out to be a weak shell for a diseased inside. This Krypton is dark, and militant. It has been brought down by arrogance, and short sightedness. This change in Krypton is jarring at first, as it’s our entry into the movie, but as the story moves along, the emphasis on the mechanics of Krypton make perfect sense.

So it’s not the Krypton we grew up with, but that’s okay. Because not only is Man of Steel a genuinely new story in the Superman universe, it is also the strongest portrayal of Jor-El I’ve ever seen. In part this is because Russell Crowe’s performance is amazing. But a lot of it is the story that gets told because of him. Most of the time Jor-El is painted as a secondary bad guy- a Kryptonian trying to reshape the future of his people through his son, manipulating him towards some end game that results in Kal-El taking over Earth. Never have we seen a Jor-El that the audience believes could be as influential as Jonathon Kent in making Clark Kent/Superman the man he becomes. Until now.

But as wonderful as Kevin Costner and Russell Crowe are as Jonathan Kent and Jor-El, the one character who steals the show and finally gets her due is Lois Lane. For years, Lane has been the contradiction- the award winning journalist who can’t seem to actually investigate anything, certainly not Superman’s true identity. Lane as a character has been presented as a love interest, who is supposed to be strong and capable, but is always weak and a mess when anything important happens. Not here. Amy Adams as Lois Lane is phenomenal, but how she’s written is the most important part. She’s not just strong and smart when the plot device calls for it, she’s this all the time because that’s who she is. She’s a true investigative journalist that has no problem revealing the identity of this mysterious stranger and by doing so, clears the decks for the ridiculousness that has shadowed the comic, and previous movie incarnations- how Lois could not know who he is. In fact (and this is not really a spoiler), it’s Lois who is given the key to defeating the big bad. The story is also a great set up for what (I hope) is to come. With the way Lois Lane has been written, and portrayed, there is for the first time in its history, a chance for real growth in the character and the story, by moving past plot devices that have bogged down the comic since its inception.

As our main bad guy, General Zod is fairly two dimensional, but instead of this being a weakness, it fits perfectly into this mechanically minded portrayal of the Kryptonians. In a world where children are grown, not born (thanks, Matrix) it makes perfect sense that the man who was literally bred to be the martial protector of Krypton would have tunnel vision. Perhaps the more interesting villain is Faora-Ul, Zod’s second in command, played by Antje Traue. While she too is a product of her environment, her sheer ferocity on screen makes her more interesting.

I tend to judge superhero movies on the tear factor. Are there scenes in the movie that are so full of heart, so powerful, that they make me tear up. In Thor, it’s when he has earned the right to again wield Mjölnir after we believe him dead. In Captain America, it’s when Steve Rogers jumps on the grenade to save his platoon.

I lost count of the number of tears I had in Man of Steel. Henry Cavill is captivating as Kal-El. With the backstory depending on flashbacks, we avoid any bogging down in origin, and instead, by seeing these events through Kal-El’s eyes, we get to experience what mattered most to him, and what made him who he is. Through his growth, and transformations, we literally see him become Superman in a way we never have before.

On a complete girl note, it also doesn’t hurt that Cavill is hot. Christopher Reeves, and Brandon Routh were both able to nail the look of Superman, and Cavill is a worthy successor.

There are some who are already raging about how this isn’t Superman, and Superman wouldn’t do that, and that’s not how it should be. I would argue that what has always set Superman apart is how human he is. Jonathan Kent’s influence is always visible- while Superman may not be human, he feels human. He feels for humans. And it is this empathy that I believe has always made him the best and brightest of characters. And that is what Cavill’s portrayal of Superman does the most- it confirms Superman as the best and brightest.

And I am grateful. Because it allowed me to fall in love with Superman all over again.