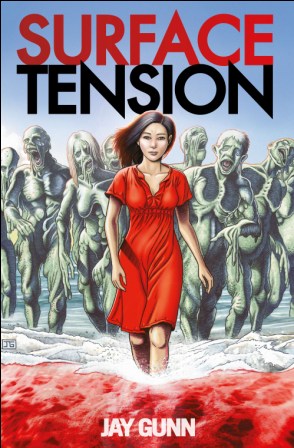 At first glance from the cover, I thought this was going to be another zombie story, but I was pleasantly proven wrong. 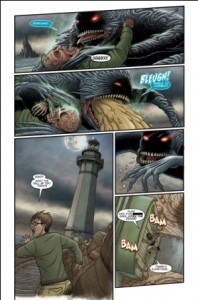 Jay Gunn has hit it out of the park with this comic. Lets start with the artwork. The lines are crisp and the colors are bright. His designs for the “selkies” and coral monsters are amazing and the “sea-sickness” disease is truly horrifying. I audibly said “Oh my GOD” the first time I saw just how deteriorated the bodies become. You can tell he put a lot of thought towards the progression of the disease and he was able to capture just how chilling it is and the effects it has on the persons afflicted. There’s one scene where one of the characters, Ryan, is on a fishing boat with his father. When they reel in the nets, there are people mixed in with the fish whose skin appears to melting away from the bones. You can feel the terror of Ryan and his father when they are confronted with this ghastly sight. But artwork alone isn’t what made this such a wonderful read. 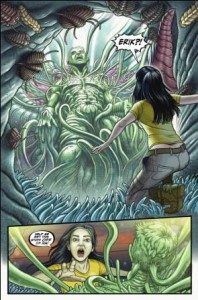 Though I feel the story was somewhat rushed, it is captivating and so different from anything I have read before. I was emotionally invested in the characters and could feel their pain, sadness and horror. Once I started reading, I couldn’t stop. I had to know what was going to happen next and I was never disappointed. The story centers on an island in the British Channel called Breith. Gigantic mysterious coral sentinels have risen from the oceans and strange creatures appeared soon after. The majority of the human population has been afflicted with a disease called “sea-sickness,” which causes horrific changes to their bodies and an immense desire to go into the sea. No one comes back once after they’ve gone in, until one day, a year after everything started, when a man and a woman with blue skin come staggering out onto the shore of the island. You are along for the ride as the townspeople try to figure out why only these two people came back and if they have returned in order to destroy the island or save it. 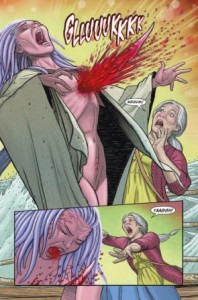 Jay Gunn does an amazing job of articulating how the characters are feeling and you never question their motives. He makes you see how they’ve come to their conclusions and what drives their actions. I do wish, however, that he would’ve gone a little more into each of their backgrounds to give a better sense of who they are. Perhaps he is saving that for the next book, which I will be keeping an eye out for. There is also a very strong message throughout the book reminding us that we should take care of our planet before we destroy everything, including ourselves. (Which is actually a pretty common message for most science fiction thrillers.)

I recommend you at least take a gander at this comic, even if only for the colorful artwork.