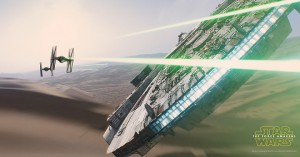 It’s been 3 days and if you haven’t seen it yet then too bad. Spoilers are bound to have circled the globe thrice over. So nothing held back here is our review.

I requested the day off from work at the beginning of the year to see this movie. I bought my tickets the night they went on sale and we watched the 11:00 PM showing on the 17th here in Lewisville, Texas. The first time I watched it (I’ve seen it 3 times now) I feel I was a little overwhelmed with the fact that I was seeing the first, “real”, new content from the Star Wars universe in my lifetime. I loved it, but there were things I didn’t quite allow to impact me the same because I was so enthralled that this was NEW Star Wars. Then I watched it again. 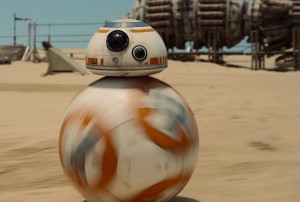 The movie opens with some lovely darkness. After the familiar opening sequence of yellow text, “Episode VII The Force Awakens” and so forth, scrolls into the abyss we see the pitch black shadow of a ship eclipsing the myriad of stars. We soon find out that Poe Dameron, a resistance fighter, has found a map to Luke Skywalker who has been in seclusion for years and lost. On the same trail and racing against him is the new evil, The First Order, a faction of government not unlike the empire that seems to have sprung up from it’s ashes. 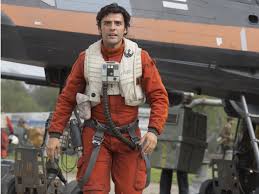 Poe, played by Oscar Isaac (Inside LLewyn Davis, Ex Machina, X-Men Apocolypse) breaks the ice when confronted on the planet Jakku by our new Darkside rep Kylo Ren with some humor that really comes across… different, different then anything offered in the movies before. “Who talks first? You talk first? I talk first…” he rambles out in a quick comedic line that echoes the confusion he is feeling as the black clad Ren crouches down before him. This kind if little humor speckles the film and is a welcomed difference and update into our new world. 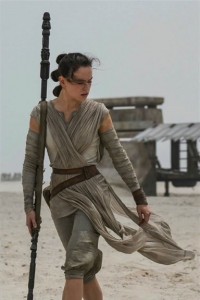 The movie introduces a plethura of new characters, as we all new was going to happen, to create a new central cast and help pass the torch. Daisy Ridley plays a vibrant new character Rey, the hardened loner on Jakku apparently waiting for a mysterious family who had marooned her there years before. Finn, who turns out NOT to be the new Jedi or resistance fighter but is in fact a defecting Storm Trooper. Finn is running from the First Order and this seems to be his main drive for the first part of the film. He flavors the movie with a lot of good comedic one-liners and his bromance with Poe Dameron is hopefully going to be something to build on with future films. We obviously also see the R2 replacement, BB8, who is an adorbs little soccerball-like droid who is almost too cute to exist, like a puppy (you know, the kind you want to squish against your face until they accidentally die).

The most intriguing of our new band mates though has to be young Kylo Ren. Played by Adam Driver from Girls, Ren (people have been shortening it to Ren for some reason, even though that’s the order he was from, “The Knights of Ren” as mentioned by new Emporer-like baddy Snoke) wields an awesome new saber and is revealed pretty early on to be the son of Han Solo and Leia Organa. 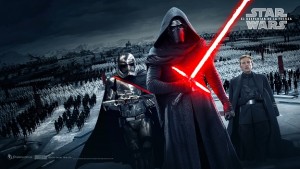 Kylo Ren doesn’t lead The First Order the same way Darth Vader lead the Empire for the Emperor. This comes across as incredible depth for the character. He is torn as he struggles with internal battles between the light and the dark. He struggles to live up to his grandfathers legacy as the last Sith Lord. He struggles with letting go of his attachments to his family and he struggles with his command of the force. In several scenes Ren breaks out into fits of rage and slashes maniacally at anything within range of his saber. After my second viewing of the film I really began to think the main story inside this film, or at least the more prevalent one, was the growth and development of Ben Solo with Kylo Ren.

Toward the end we reach a penultimate scene, which you see coming miles away but isn’t any less powerful, where Kylo finally seems to kill what is left of Ben Solo inside him by cutting down his father. When I first saw this, I knew it was coming and thought it was a well done scene dispite the obvious foreshadowing. When I saw it again Adam Driver’s performance stood out as phenomenal as he drops his mask and teeters on the edge of this harsh decision he knows he needs to make. As Rey screams from above and Chewbacca lashes out following you are reminded of A New Hope when Ben Kenobi is cut down by Darth Vader. 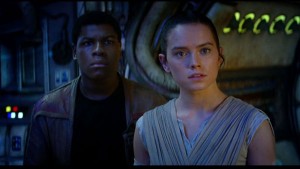 The overall structure of The Force Awakens isn’t entirely new, and I think that is part of the point. Fans have struggled with the prequels. They didn’t really present “new” content from a certain point of view. We knew from the beginning there would be clone wars, Anikin Skywalker would become Darth Vader and Luke and Leia would be his children. We knew Obi Wan would defeat him in battle and his body would be detroyed, the emperor would be a Darkside of the Force user, and all of the jedi would die.

The Force Awakens eases this transition of the new universe upon us. We don’t know what’s going to happen at the end of this trilogy and we already have a weary feeling laid upon us by some of the follies Lucas left us with a decade earlier. Abrams made what must have been a very calculated and clever approach by following a loose layout from the first film. This tale is more in line with The Heroes Tale. A hero(in) is drawn out of her land to perform a quest. She takes on a mentor who dies along the way. She gathers companions who contribute to the journey, each in their own way. Abrams also added in his own Deathstar with Starkiller Base and he basically just reinvents the empire as the quasi-empire called The First Order. It all works though. 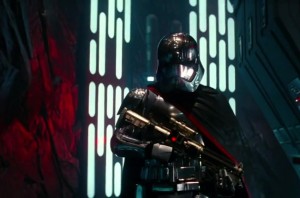 I do have faults. J.J. Abrams has let me down before (see Lost). He is really great at creating a believable world and likeable characters and creating intruigue around unanswered questions. His follow through is where I am worried. I tried to imagine how the government functions in this universe. Is the Republic and The First Order two waring factions of government or is The First Order just remnants of the empire extorting funding for their operation by exploiting worlds and creating fear. They do have a Deathstar. 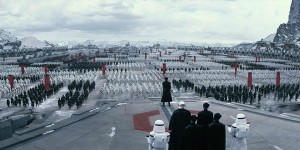 I also wonder, why was Kylo Ren is so easily fended off by Rey and Finn. He was injured and is obviously having a break down, but they had nothing. Rey was learning to use the force rather quickly and with no training, but…? And I also don’t understand the purpose of Captain Phasma. She gave up the secrets of the base and left it exposed without much of a struggle. The Empire would have her exicuted for folding so easily.

These small qualms didn’t hurt my feelings for the movie in the end though. I can imagine a reason for each and the movie ends pretty open with a lot left to be explained in future films. If I’m going to grade it, it gets a realistic A+ but a fanboy MORE AMAZING THAN WORDS CAN DESCRIBE! I watched it 3 times in less than 48 hours and the first viewing I dressed as Lando Calrisian which requires me to grow my hair out for months and facial hair.

They passed the torch and as these new cast members begin to break away from those-who-paved-the-way. I expect major things from this franchise. Disney could hurt it, so let’s not get too excited. Over time it could all grow out of control and burn out, but for now this next trilogy is off on a good leg and looks like it will deliver everything we could hope for. It is breaking grounds with it’s diverse character choices and it’s succeeding where the last three films missed the mark. I want to see it again and I am dying inside knowing episode VIII won’t be out for two-years. If you haven’t seen this movie yet, see it. See it now. Stop everything you are doing and see it so that you can say you were there when this happened.