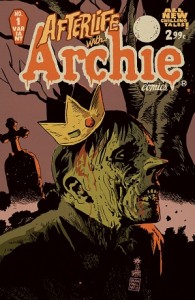 Afterlife With Archie is a new series put out by the folks at Archie Comics that was inspired by a Halloween variant cover of the regular series Life With Archie. What started out as a limited run has become an on-going series and is possibly changing the way things are done at Archie Comics.

Last night at the book club we gathered at Boomerang to discuss this original approach to the classic series. The overall feel was that it was amazing. Right off it was clear that while everyone was familiar with Archie, from the compilations available at grocery store checkout-stands across the nation, no one was well versed in the world. Sure we all know Jughead, Archie, Betty, and Veronica. We all know Betty and Veronica fight over Archie and  Jughead is kind of dumb (I’m pretty sure a few guys were confusing it with Happy Days). What eventually came out though, was that while know one was really an Archie fan, Afterlife With Archie had a hook on par with any comic out on the shelf today. 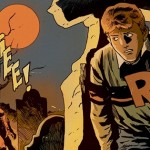 The story is about a zombie outbreak in the town of Riverdale where the Archie gang hangs their crowns. Jugheads dog, Hotdog, is killed and Jughead seeks out the help of Sabrina the Teenage Witch. A few mishaps later and zombie outbreak.

The art is consistent and the coloring is amazing. They do this fun contrast with color that was reminiscent of classic horror. The vivid displays play on the atmosphere of the book, painting the heavy handed horror and violence in reds and oranges with more blues and other soft colors for everything else. 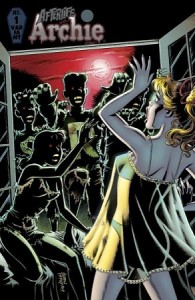 The book itself, while is the first rated teen+ book ever released by Archie Comics, is still approachable for almost anyone. It does have some violence and obviously there are deaths in it, it is a zombie tale, but I wouldn’t call it on the same level with Marvel Max or other M rated material. It is surprisingly tame and raw all at once. One person compared it to Shawn of the Dead meets Quinton Tarantino.

The new mature approach has been so popular rumors are circulating that Archie publishers are revamping things with a new mature theme. While there line Red Circle has been around since the 70’s and DC has even tried to bring some of their superheroes into the light it has struggled. Changing the name Red Circle into Dark Circle and using more user owned story archs with a darker edge may well prove the right move.

The end result last night was that everyone really liked it. The Walking Dead has no end in sight and has lost something over the past year or so, but Archie is new, inventive, and an approach to Zombies and horror that hasn’t been beaten into the ground.

The first volume is fairly complete even though the series is an on-going and from what I heard it seems like everyone will be adding it to their pull list. Pick up vol #1 at your local shop and continue on with issue #6 in stores now. 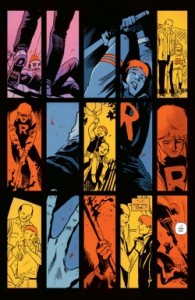 Writer/Artist for X amount of years. Recently worked with people from IGN on a comic and studied writing under Victor Gischler of Marvel Comics at RSU in Oklahoma more X amount of years ago. Follow me @WerewolfOrigin on twitter
View all posts by Eric bookout →
Tagged  Afterlife with archie, archie comics, betty, dark circle comics, jughead, mature comics, riverdale, veronica.
Bookmark the permalink.