My name is Geek Girl, and I’ve never attended a Con.

This has been my shameful secret. Despite living in both Atlanta, and New York City, I had never attended a con before yesterday. Work, money, other reasons always prevented me. However, my new home of Albuquerque the last four years has hosted a con, so I decided to go. There were so many decisions to make- what to wear? (I’m not a cosplayer). What to see? What protocols/etiquette to follow? (I admit to hearing Wil Wheaton’s voice in my head about con etiquette).

So, dressed in my Blue Sun t-shirt, I set out.

First, let me tell you that I forget sometimes (okay, all the time) that Albuquerque is a city. This notion was disabused as soon as I pulled into Hotel Albuquerque in Old Town looking for a parking spot. And had to drive past the FIVE supplemental parking lots for the hotel. Holy Cow! Albuquerque is New Mexico’s only Con, and Denver, Austin, and Phoenix are the closest ones after, so I guess a lot of people traveled here. 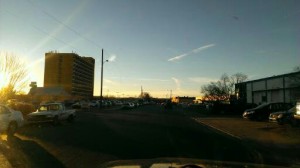 My con was not off to a great start as my phone/camera died almost as soon as I got there. 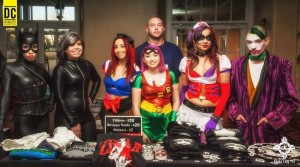 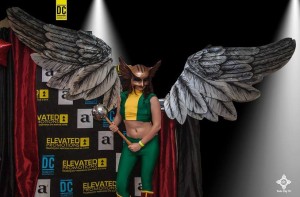 There were a lot cosplayers there, and next year I definitely plan to make sure I have an actually working camera so I can take pictures. I’m not a cosplayer, but I admired the dedication of the people there, and was impressed by their generosity to stop and take pictures with anyone who asked.

I was mainly interested in the Photo Ops, as with the smaller con, the panels were singles, and I wasn’t sure how interesting they’d be, but had timed my arrival to have some time to walk around the floor.

First, let me tell you, I always thought the rumors about the smell of cons was an urban legends. Holy Cow! Not an urban legend. Overwhelming to be trapped in the cattle run type hallway trying to look at things with hundreds of unwashed bodies. I mean, way to live the stereotype of living unwashed in your parents’ basement. That being said, the Albuquerque Comic Con volunteers worked really hard to get people to keep moving in the smaller hallways and not have traffic jams.

I got to see Gil Gerard (a personal favorite since my childhood Buck Rogers days) and Corey Feldman, who quite frankly looked like you’d expect him to look after all the crazy stories. He was actually over 45 minutes late to his photo op, causing the line for Adam Baldwin  and Jonathan Frakes to have have to wait forever, and irritating quite a few fans. Feldman showed up with a cigarette in his mouth and a half dressed (okay, maybe one quarter dressed) white angel on his arm. I wasn’t impressed, but given news since he was the star of Goonies and The Lost Boys, was not surprised. (By the way, I’m tiny, and he was way shorter than me).

As I stood in line, waiting for Adam Baldwin and Jonathan Frakes, I kept hearing Wil Wheaton’s voice in my head, an amalgam of different posts he’s written on cons. How the photo op is just that- it’s not a place to get items signed, or have long conversations. I also seemed to remember (misremember?) him stating that often the people don’t want to shake hands after hours, days of doing this. So I followed their lead. Adam Baldwin offered his hand. Frakes did not. So I shook Baldwin’s hand, and didn’t Frakes. I made sure to thank both of them, and tell them it was nice to meet them. They wouldn’t remember me from Adam (no pun intended) but I figure Wheaton’s “Don’t Be A Dick” philosophy also means you show common courtesy. 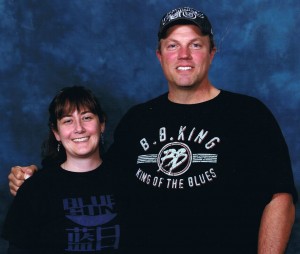 I was very excited. Firefly and Serenity are personal favs, and I liked Baldwin a lot in Chuck. Star Trek: The Next Generation was a defining moment of a good chunk of my childhood, so both experiences were amazing. It was a great experience. Once I got home and looked at (and shared) the pictures, I was struck by a couple of things- Adam Baldwin is HUGE! And I felt for both Baldwin and Frakes, as they seemed a little shell shocked. They were very nice, don’t get me wrong, but perhaps because I follow Wil Wheaton, I felt for how hard these cons must be on them, so many hours having to be “on”, it must be tiring.

The rest of the con I think is probably the norm. I didn’t have a lot of cash, and I didn’t recognize a lot of the comic artists that were there (mostly smaller presses) but I enjoyed walking around and looking. There were a lot of wrestlers there (also lost on me, sorry guys). One thing that was very cool (and that I managed to capture before my phone/camera died) was that the hotel had a cool open courtyard separating wings of the building where everyone seemed to go to get some (needed) fresh air and play around. It looks like kids playing, or local tribe gatherings, which I thought was cool. 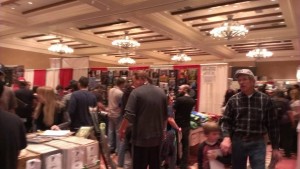 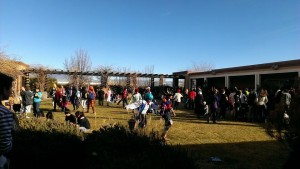 So, what did Geek Girl learn from her first con? Let’s see:

So that’s it guys, Geek Girl’s first con experience. Pretty cool, and that picture of me and Adam Baldwin may become my profile pic forever. Or at least until next year’s con!