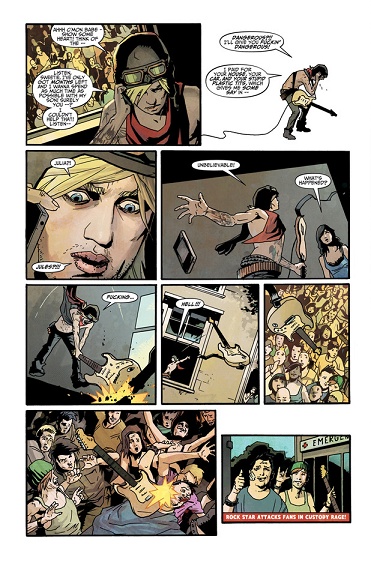 Death Sentence may be one of the lesser known titles at your comic shop. It’s certainly not going to unseat Spidey or Bats and their reign over the front shelf. If you like a good story driven book with an off beat hook then you may dig a little further back in the store or talk to your shop about ordering the series for you. It’s pretty good so far. Monty Nero spins a decent thread and as a talented artist himself puts out some impressive cover art giving the characters more dimension with a deeper and much more rich pallet.

The story this ish gives a little more insight into the characters we’ve come to know so far. Weasel, the washed up rocker who can walk through walls, continues to spiral out of control. We see a brief moment of clarity and humanity as his ex and mother of their child calls and tells him he will not get to see his son again before he dies. Then as he spirals even further his powers get him into a pretty effed situation. Though not as compelling as the other two Weasel has some baggage to build on. As he come full circle I can see him being the most well developed of the three (he reminds me of Charlie from LOST. And despite what some say, Charlie was one of the best characters of the show with the most impactful death). 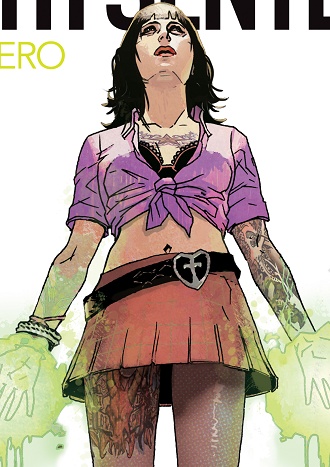 Varity is obviously supposed to be the star of this mag. She has been noted as having off the chart powers and from the covers and previews of upcoming covers she seems to be front and center. As a six part series though I really have to wonder when the big plot twist is coming. I really like everything I’m reading but I was hoping for a solid 12-issue run. I suppose each character can wrap up their remaining months to live in six issues, but we haven’t met the villain yet and the over all event that drives our trio together. By next issue we’ll be half way through.

Issue #2 primarily builds more on the characters. We learn what Monty’s powers are and though he displays a funny-slash-crude use of them I have to wonder if he can even be likable as the story rolls on. If you Jedi mind trick nuns into sleeping with you what makes it any different from a roofie? I suppose we don’t know that’s what he did but there are certain implications and there’s definitely a moral line crossed. Maybe Monty turns out to be our villain?

So far I’m still impressed with this book and looking forward to the remaining issues. Unless they cure the virus I can see plenty of room for a second volume after this one concludes.

This is still a solid series. 4 out of 5. TITAN comics has a good thing so far with this back. Try and and let me know what you think.