Seduction of the Innocent by Max Allan Collins 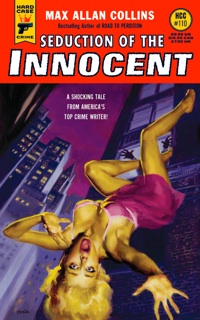 It’s 1954, and a rabble-rousing social critic has declared war on comic books – especially the scary, gory, bloody sort published by the bad boys of the industry, EF Comics. But on the way to a Senate hearing on whether these depraved publications should be banned, the would-be censor meets a violent end of his own – leaving his opponents in hot water.

Can Jack Starr, private eye to the funny-book industry, and his beautiful boss Maggie unravel the secret of Dr. Frederick’s gruesome demise? Or will the crackdown come, falling like an executioner’s axe…?

An illustrated whodunit inspired by America’s real-life “war on comic books” in the 1950s, from the award-winning master of the historical detective novel, MAX ALLAN COLLINS.

Jack and Maggie Starr are great characters and the fact that the story takes place during real life events makes Seduction of the Innocent a must read.  Lovers of “mob deals” will get a kick out of it when Jack and Maggie start wheeling and dealing with Dr. Frederick and use their underhanded tactics to disarm an enemy.  If you know anything about the attack on comic books during the 1950’s you will crack a smile every time a character is introduced that was a real person.

Seduction of the Innocent was compliments of Titan Books.

A small time blogger with big time dreams and a love for everything geek.
View all posts by Jesse (The Pen of Doom) →
Tagged  allan, collins, comics, dr., frederick, jack, maggie, Max, mystery, seduction of the innocent, starr, wertham.
Bookmark the permalink.