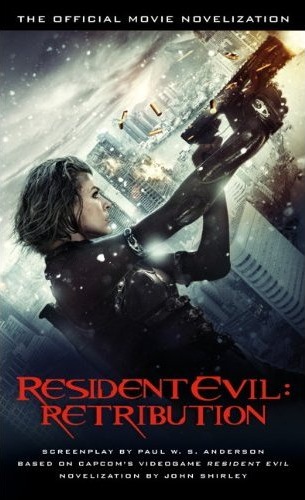 When it comes to books that are based on movies there are really only two ways it can go; either you get a book that adds to the story that the movie put forward or you get a book that just tells the same story only in text instead of CGI. Resident Evil – Retribution at first feels like it could be both, however, unfortunately it tends toward being just another way of “seeing” the movie. Here is a synopsis of the book/movie:

The Umbrella Corporation’s deadly T-virus continues to ravage the Earth, transforming the global population into legions of the flesh eating Undead. The human race’s last and only hope, Alice (Milla Jovovich), awakens in the heart of Umbrella’s most clandestine operations facility and unveils more of her mysterious past as she delves further into the complex. Without a safe haven, Alice continues to hunt those responsible for the outbreak; a chase that takes her from Tokyo to New York, Washington, D.C. and Moscow, culminating in a mind-blowing revelation that will force her to rethink everything that she once thought to be true. Aided by newfound allies and familiar friends, Alice must fight to survive long enough to escape a hostile world on the brink of oblivion. The countdown has begun.

Don’t interpret my first paragraph wrong, I was entertained by the book as much as I was the movie. Also, John Shirley does add certain internal thoughts to the characters that its hard to convey on film as well as a small side story about another group of survivors. Action scenes are often hard to reproduce in print media, but Shirley does a great job of making all of the action match it’s movie counterpart.

If you are a fan of the Resident Evil series of games or movies then I don’t even have to tell you to pick up this book. If you wonder what an actor or actress is thinking when they’re on the screen then this book will clarify. Overall Resident Evil – Retribution was an entertaining retelling of a story.

A small time blogger with big time dreams and a love for everything geek.
View all posts by Jesse (The Pen of Doom) →
Tagged  alice, book, john shirley, novelization, Resident Evil, retribution, umbrela.
Bookmark the permalink.