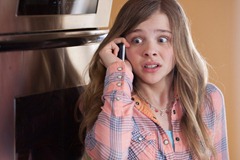 He gave me a warning, like an old gypsy woman telling my unfortunate fortune. While I took Brandon’s warning to heart, it wasn’t up to me to see Movie 43. I was coerced with the promise of a paid ticket and snacks.

The movie consisted of several shorts, starring a variety of stars, and they were somewhat linked up with this idea that this was a movie being pitched by Dennis Quaid, who needed the money so he was desperate to sell some kind of script. It was mentioned that half of these actors are denying their involvement with his movie, and I’m going to follow their lead and now move on and pretend I don’t know anything about it.

This movie was/is getting terrible reviews! But when I read at the end of two of them that this was an easily digestible action movie, with some funny here and there, I knew it would be ok. I had no idea it would be so gory, but there it was in all its head popping and body ripping glory. I was actually really entertained with it all, despite the fact that everyone instinctually knew hand to hand combat.

Gretel (Gemma Arterton) looked great in her leather skinpants and sugar sick Hansel (Jeremy Renner) was his entertaining self, even though at several points in the movie he had to stop for his insulin shot. Yes, Hansel is diabetic, folks. This movie is heavy on action, not really letting too much dialogue get in it way, and light on complicated story, but the ageless Famke Jannsen shows up as the evil witch that throws light on the witch killing duo’s past that made a lot sense for this particular setting. 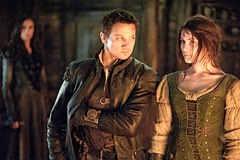 The witch killing is creative and the types of magic the witches use to kill humans is rather entertaining too. The witches themselves are host to beautiful makeup and creative designs, making those contestants on Sy Fy’s Face Off look like complete amateurs. It was a shame we didn’t get to see more of the evil witches before they were all quickly dispatched by the witch hunting siblings.

Is this the type of film that you want to see in theatres? Probably not, but it is worth watching if you like gritty fairy tales that go really over the top with the profanities and bloody bits. While the 3D didn’t over do the things-flying-at-you-gimmick, it did do it one too many times.

Out of this weekend’s double feature, Hansel and Gretel: Witch Hunters comes out on top, pounding Movie 43 so far into the ground that it will take millions of years of erosion for it to show back up.