This is a documentation of the first session with the patient, James Howlett. Initially, we will explore James’ childhood, up to his early adulthood. In future sessions, we will delve into his sorted and mysterious past. By far, James Howlett is the most tragic figure I have ever come across. James has suffered more in his childhood than most have suffered throughout their entire lives. Just one of his tragedies would be sufficient enough to crush the fragile human psyche.

When I explored James’ background, I found a history riddled with loss, betrayal, and lies. During James’ early childhood, he lost his older brother, John Howlett III. Soon after his brother’s death, James’ mother, Elizabeth Howlett, was committed to an asylum. It seemed as though the death of her eldest son was too much of a strain on her mentally and emotionally, and she was never truly the same. James was a sickly child, never really able to fully experience childhood due to his extreme allergies. He spent most of his time being coddled and kept inside. The Howlett family was rich, building their massive fortune on the sale of copper. This afforded James the best of care and housing. To the outside world, James seemed to have everything. However, this couldn’t be further from the truth. His father, John Howlett II, was always very busy with his work, so he did not spend too much time with James. After her time in the asylum, Elizabeth returned to the Howlett home, but she was emotionally distant and never fulfilled her duties as a mother. She was just a shell of her former self. James always spent time by himself, thus a young girl was brought in to accompany him. This girl was named Rose, and they quickly became close friends.

The Howlett property housed not only the family, but their caretakers and the landscapers. The landscapers name was Thomas Logan, and it has been inferred that he had more of a prominent role than the property caretaker, that of Elizabeth Howlett’s former lover. Logan was a heavy drinker and he frequently beat his son, whom simply went by the name “Dog.” Dog, James, and Rose became great friends, but due to his constant abuse, Dog quickly became aggressive and his behavior began to put himself at odds with the other children, and more so the Howlett family. This all came to a head when Dog viciously killed James’ beloved pet dog. This led to an argument between James’ father and Thomas Logan, and subsequently led to Logan being fired and escorted off the Howlett property. Later on that evening, in a drunken rage, Logan returned to the Howlett property in an attempt to get Elizabeth and run off together. However, he was interrupted by John Howlett II. This led to an altercation that soon involved everybody in the house. Logan killed John Howlett II in front of James with a single shotgun blast t o the head. This broke James’ heart, and soon he became enraged and lunged after Thomas Logan. Unbeknownst to everybody, it was at this time that James Howlett’s mutation manifested itself in the form of six bone claws protruding from the top of his hand, three in each hand. 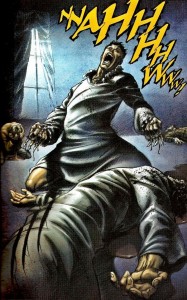 As James lunged at Thomas Logan, he drove those bone claws into his torso, killing Logan. Soon after these tragic events, Elizabeth Howlett killed herself, also with a single gunshot blast to the head, thus leaving James orphaned. Horrified that his grandson was a mutant “creature,” the elder John Howlett gave Rose some money and told her and James to leave, banishing James from the family. Logan’s son, Dog, was taken in by the elder John Howlett as his ward. As you can see, James suffered the death of his brother, father, and mother, not to mention the rejection of the only family he had left simply because of the way he was born. The circumstances surrounding the deaths of his parents were so devastating that, as James matured, he repressed them. What a crushing and debilitating start to an individual’s life. Deeply traumatized by these events, James and Rose fled the Howlett estate and settled in a small mining community. It was here that James began to flourish, and his mutant abilities became more and more prominent. Due to James’ strength and work ethic, he quickly became well respected. James developed a love for Rose, but while in the mining town they were under the guise of cousins, so James did not act on his feelings for Rose.

On his deathbed, James’ grandfather requested that Dog track down James and Rose so that he can make peace with them before he passed away. Dog tracked them down with ease, and confronted them both. By this time, molded by years and years of abuse by his father, Dog had already become a psychopath. Dog and James fought, and James defeated Dog. It was at this point that James popped his bone claws, much to the horror of everyone in the mining community. While ready to impale Dog, Rose jumped in the middle of the two to stop James, and accidently took the blow. James held Rose in his arms until she died, and then disappeared for an unknown amount of time.

These tragic childhood events had an indelible effect on James and the formation of his personality. Although repressed, the memory of his father’s murder, and mother’s suicide, left an unmistakable mark on his subconscious. Combine those horrific events with the death of his first love, Rose, and one can logically see how we get the man that we get today. Unfortunately for James, his devastating childhood was only the beginning. My next writing on James will detail his life after childhood, the time spent in the mining community, and the death of Rose. As stated earlier, these childhood events are only the tip of the iceberg, as James’ life gets far more convoluted than initially thought as it progresses. Early on, one can see a place for Freudian theory, most notably the defense mechanism repression, in which involves blocking and pushing unacceptable or threatening experiences into the unconscious. It’s definitely a long road ahead, but one can only hope that these sessions can help James.

I’m a lifelong comic book fan. Comics pulled me in at an early age, with influences ranging from Chris Claremont’s historic X-Men run, Walt Simonson’s Thor run, Mike Zeck’s run on The Punisher limited series, Jim Lee’s X-Men, the early 90’s X-Men animated series, and the best cartoon ever made, Batman: The Animated Series. As a kid, these comics and cartoons gave me a new world to go to when the real world wasn’t so nice. Because of this, comic books will always have a special place in my heart. I love everything about comics, and still get the same feeling reading them today as I did when I was a kid. My major in college was psychology, so I love to incorporate that into comics.
View all posts by Steven Brewer →
Tagged  comics, Logan, marvel, Marvel Comics, Wolverine, Wolverine and the x-men, X, X-Men.
Bookmark the permalink.