I’ve always been fascinated with watching Table Tennis at the Olympics.  Growing up with a “ping pong” (as it’s commonly known) table I was a pretty decent player but watching these highly skilled players standing upwards of ten feet back from the end of the table slamming the ball with such force is just amazing. 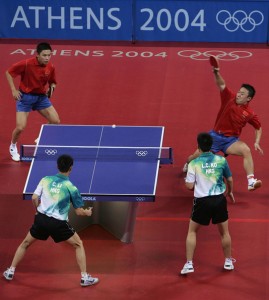 The sport truly earns the more grown-up name at this level since the slams and passing shots are put forth with quality and accuracy on par with professional tennis players.

Over the six Olympics which the Table Tennis has participated there have been twenty-four gold medals handed out, twenty of which have gone to Chinese players and only one European player has ever captured gold.  With that kind of domination you can guess that the Chinese are heavy favorites at this year’s games as well.

Unlike in the case of Mr. Gump it is unlikely that an American will ever rise up and dominate the sport.  But that matters little. 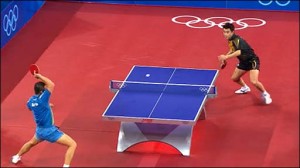 Points are scored one at a time and can be achieved in various ways.  Similar to tennis the ball can only bounce once before being struck and must be returned to the other side of the net, though not necessarily over the net.  Serves can result in an ace if the initial offering is not returned.

There are only a handful of can’t-miss events at the Games and this is definitely one of them.  It’s easy to follow rules and basic, simple rules structure makes it easy for novices to keep up.

I hope you have enjoyed this preview of the 2012 London Olympics Swimming event.  Continue to check 8DaysAGeek for more previews of Olympic events.