I am always leery when an original book changes creative teams.  I’ve had troubling experiences with them in the past.  After issue twelve Warren Ellis and Bryan Hitch left The Authority and were replaced with Mark Millar and Frank Quietly.  To which I breathed a heavy sigh of relief.  Millar is a well respected writer with loads of experience and Quietly went on to do All-Star Superman…so you tell me if you think he’s quality or not. 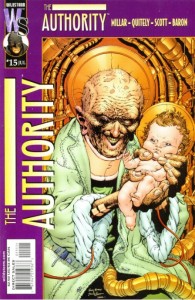 There are not-so-subtle changes to writing styles and artistic details when it comes to the characters; but considering the massive change undertaken by the book itself a radical alteration to the personnel working on the book makes sense.  Some of the differences in character design take getting used to, but it’s not insurmountable and does not distract from the story itself.

By now, if you’ve been a diligent follower, you know that Jenny Sparks has departed with the end of the 20th century and is perceived reincarnated in a newborn baby in Singapore.  As this story arc launches, entitled Nativity, the celebrity of the team has reached epic proportion. 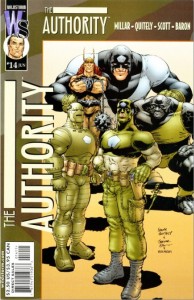 During their mission to retrieve the child, named Jenny Quantum, the team faces a team of super-powered killers.  It turns out there’s a rogue mad-scientist (yes, another one) who’s been designing and creating freakish looking super beings for decades with a plan to rule the world…how original!

The original part is how the team reacts to the villain and what they do with him, which I applaud Millar for surprising me.  It’s an uncommon thing when it comes to comics these days. 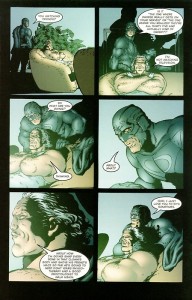 Millar also makes a point to put his stamp on each of the characters.  He takes time to show either a new side of the character, like Shen being a cradle-robbing sex-aholic or revert a character like the Engineer being an out-of-her-element fighter, again.  Throughout the arc though each character grows in some way or shows us something new, like a brooding and vindictive Apollo.

Overall I was really impressed with the first salvo from the team of Millar and Quietly and am excited to see where they take the book!