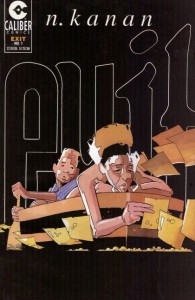 As defunct comic companies go, and there are myriad, Caliber easily makes it into the top five that I miss.  Caliber brought us such great books as Construct, The Crow, Negative Burn and the book I begin reviewing today, Exit: Traitors.

Exit: Traitors, set in the urban jungle that is the greater London metropolitan area, is not so English that it makes it hard to understand what the characters are saying.  Nabiel Kanan does a good job of creating the essence of the British nature of his characters (with subtle differences in lingo) without going so far as to subterfuge the nature of them.

Not to sound like an ignorant American, but in some ways I am!  British slang is genuinely strange and tends to be completely nonsensical.  I follow well enough during Nick Hornby books, but in some of my previous reviews like Phonogram and Blue Monday, there is a use of dialogue that is just beyond my reckoning.

The story features two main characters, Karl and Louise.  Karl is, of course, desperately in love with Louise.  Louise, for the most part, is depicted to see Karl as nothing more than a good friend.

Throughout the five-part mini-series, Traitors, winds its way through the events leading up to the end of summer and the coming of fall term.  Karl, not meant to be the adventurous type, embarks on an adventure that will change his life thanks to a fateful sighting.

If he was American I’d say Karl was full of piss and vinegar when it came right down to it.  The guy has guts.  Along the way he gets involved with a burglar (a cute burglar, but a burglar nonetheless), a gang of pirate thieves, a secret society and a really, really big pipe. 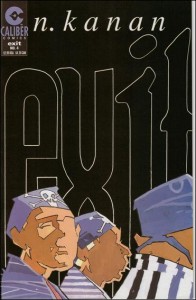 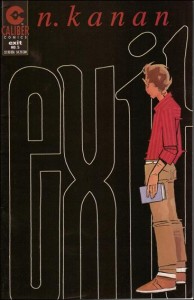 Louise, the antithesis of Karl in many ways, is all too ready to embark on her grand adventure to college in France.  The only thing holding her back is her affinity for Karl, despite the as-yet-platonic nature of the relationship.

Exit: Traitors is visually dynamic in black & white.  Unlike most black & whites where its black on white, this is white on black; making the panels jump out at you.  Kanan does an incredible job of integrating panels into the page.  Most writers are compelled to make the most of each page by maximizing the panels, Kanan seems to fly in the face of this.  He often allows vast spaces of blackness to inhabit the page between panels to convey the idea that comic is happening in linear time; that the time between when you read the previous panel and the next is the time it took the character to decide what to do next. 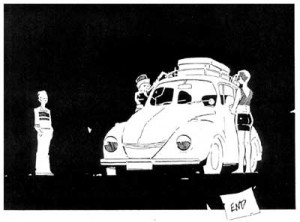 I think this is what really drew me to this book originally and what keeps me coming back to it every few years.  It helps remind me that no matter what drivel I may find on the stands that particular week/month, there has been great comics before and there is bound to be so again.

Check back next week when I begin my review of the next installment: Exit: Under the Sun.

If you have suggestions for future Bin Fodder reviews, drop me a line in comments!  Also, see below for this week’s Playlist!