OFF THE RACK: Words and Panels v.1 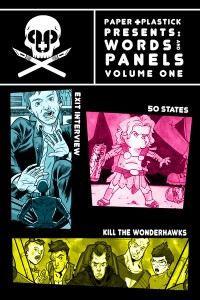 Some of you may be familiar with the record label Paper & Plastick started by Less Than Jake drummer Vinnie Fiorello.  The label is currently expanding its market share into the realm of comics.  I already reviewed one such book, which was a joint venture with Viper Comics.

Words and Panels is a collection of four stories.  The first two of the mini-comics are music related and are based on stories from the bands themselves, called 50 States.  Both are adapted to script by Matt Anderson and illustrated by Matt Jordan.

50 States number one stars Less Than Jake and follows the events that happened at one of their shows in Kansas.  It’s a light-hearted friendly story involving a wandering soul who happened to be un-celebrating a birthday but got the amazing gift of being on stage and having hundreds of people sing “Happy Birthday” to him.

50 States number two features the Dopamines at a show in Ohio.  The story involves Juggalos, guns, broken windows and the police.  Oh, did I mention the crazy Trojan midget?  No?  Well, then it’ll be a surprise! 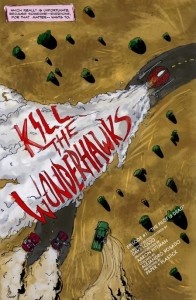 The third mini comic is called Kill the Wonderhawks.  I was rather unimpressed with this portion of the book.  The Wonderhawks are clad in garb reminiscent of Battle of the Planets and in this story they’re battling backwoods hillbillies wearing ass-less chaps with no undergarments at all.  Yep, full frontal male nudity in a comic…just the thing to reach the masses of comic book fans.  And if that wasn’t bad enough the script comes across as if it was written by a fifth grader who just found curse words. 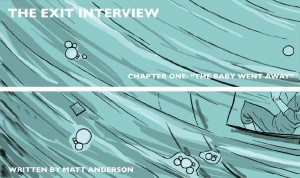 The fourth and final mini-comic of Words and Panels is called Exit Interview.  The story follows the events of a young boy dealing with the loss of his sister in a house full of “grievers”.  In an effort to escape the mass of people the boy runs to a room in his basement that stores his action figures and comics.  What transpires from there is surprising and quite interesting.

Overall, the book is quality, especially for the first launch of a non-comic company.  It shows the diversity of what the company will be going for.  50 States will incorporate stories from some of your favorite bands, Exit Interview takes more of a serious, coming-of-age style of story-telling.  Kill the Wonderhawks was the one real drawback of the book, but not enough to make me dislike the comic itself or the direction of what I expect this line to become in the future.

If you’re interested in reading any of these stories you can visit to comic store page and get the book in digital form for free or in physical form for a reasonable price.

Words and Panels gets an A for overall content, quality of art and story.  Plus, crazy Juggalo people!

I hope you enjoyed this week’s OFF THE RACK.  Check back next week for an all-new review!