OFF THE RACK: Action Comics – Issue 3 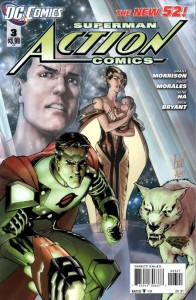 As DC’s New 52 pushes on I found myself drawn to Action Comics issue 3.  A lot of which, I cannot deny, had to do with the cool-factor of the cover.  We see Jor-El, Lara-El, Kal-El (as a baby), a badass sabretooth-like beast and a Kryptonian setting.  Looks pretty sweet, right?

Add this to the fact that I have been incredibly impressed with this book to date and it was an easy decision to pick it up.

Now, that being said, in the interest of full disclosure the shop I was at had a limited amount of new releases in the indie field.  I’ll go into more detail about that in the store location debrief below. 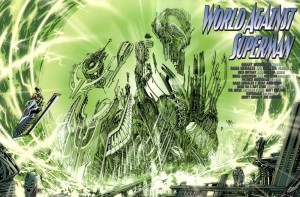 Action Comics issue 3 starts out on Krypton, when Kal-El is a mere baby and the end of his world is near.  But in this New 52 version of Superman’s origin there is an added twist: they show the theft of the city of Kandor by Braniac.  Visually striking, the scenes jump off the page.  The event, seemingly, takes place as a subconscious memory that comes out in dreams Kal is having.

The key component to the issue, though, is Braniac’s involvement and introduction as a villain.  Why is this important?  It’s obvious, isn’t it?  Brainiac has come to earth.  And not surprisingly, Lex Luthor is involved and had struck the deal that made it a reality. 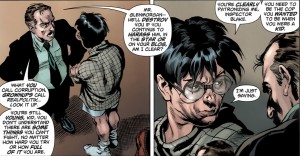 The character components of Lex and Clark (Kal) respectively in this new Action Comics reboot is really dynamic and a vast improvement from where the characters were.  Clark is strong willed and callus.  Lex is exuberant in his evilness, not yet has he reached malevolence, he is young and charismatic.

I am very impressed with where Morrison has taken this book and am excited to see where it goes in the months and years to come. 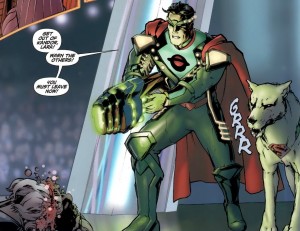 Check back next week for another new book review!

Store Review: Action Comics issue 3 was purchased at the Graham Cracker’s Comics in St. Charles, IL.  As a kid this was my homebase for comics.  I return to it now and again when I’m feeling nostalgic.  Today was one such day.  The only downside to this Graham Crackers, for the purposes of this article, is that the shop is much more of a main-stream shop.  The indie section is limited and the DC/Marvel areas are huge.  The benefits of this shop, however, are a massive collection of trades and a huge assortment of back issues.  So if you’re in the market for back-issues of any sort, need to fulfill that trade paperback want you’ve been harboring, check it out!