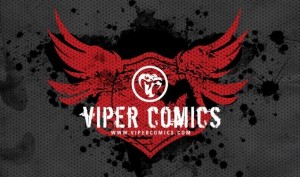 As a preview to what will be a monthly series Perfect Teeth issue zero introduces readers to Nathan Almost, the true world of vampires and a monster music scene.  Produced by Viper Comics and written by Vinnie Fiorello (Less Than Jake) & Matt Anderson (White Picket Fences/Kung Fu Panda) with art by Peter Wonsowski & Matt Jordan this story comes together really well.

The opening page depicts cave art of vampires bringing down a beast and goes on to show vampires throughout history.  As it wraps up the story even manages to take a jab at the current Twilight style of vampirism that presently exists.

It’s an intriguing take on what usually gets either ignored or really glossed over in parts by most movies and books on the topic.

The crux of the story centers around a snippet of a documentary on Nathan’s life and a sit down interview with Almost and fake vampire singer Nick Payne.

In a way the story is about redemption and acceptance.  It’s even somewhat moving if you allow yourself to get that invested in the story.

I am looking forward to seeing this title come out fully when it launches in early 2012.

Perfect Teeth gets an A grade from this reviewer.

Hope you enjoyed this week’s preview version of OFF THE RACK.  Check back next week for an all new comic review!