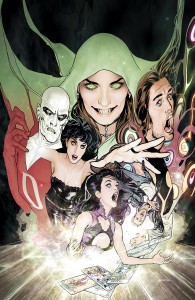 DC’s New 52 Reboot has created several mysteries: who is the hooded woman?  Why did she appear at the end of Flashpoint and has since shown up in each New 52 title?  Who will be in the Justice League?  Will Superman always look like he has a stick up his butt?  (ok, that one I just made up…but seriously, he kinda looks like a douche).

Justice League Dark helps answer at least one of these questions.  As it is set in present-time, we see the some members of the Justice League as they are five years after issue one of the Reboot.  Added to the known characters: Batman, Superman, Wonder Woman, Cyborg, we get Zatanna.  I’m sure this isn’t a big surprise, I seem to recall seeing her in some of the teaser panels.  But still, it’s nice to have confirmation. 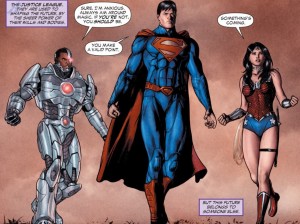 But this book isn’t really about the main players in the Justice League, it’s about the B-teamers.  Though, are they really the B-squad when they have to come in and save the A-team’s ass?

Justice League Dark introduces the reader to the cast of characters who will make up this title: John Constantine, Shade, Madame Xanadu, Deadman and I would imagine we’ll see our fair share of Zatanna in this title as well.

Issue one sets the table for a paltry storyline, nothing big going on…just hundreds of cloned women (big clone theme this week) and the end of the world. 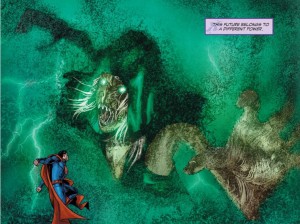 Enchantress, a vile and evil being, has set loose upon the world and when the Justice League sends in three of its heavy hitters: Superman, Wonder Woman and Cyborg, she mops the floor with them.  Now, it makes little sense to send Superman in to this fight, unless he himself is unaware of his own limitations when it comes to magic.  And that’s exactly what comes from this issue, a lesson in humility.

Madame Xanadu is like at the center of it all.  She is who is calling all the magical powered beings together in order to fight Enchantress.  And it is she who will see the world saved from her evil. 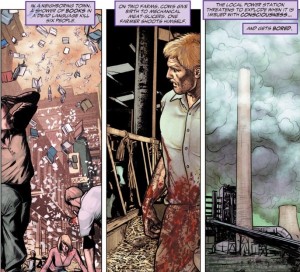 I was really impressed with the look and feel of Justice League Dark.  Milligan has a good feel for these characters and I see this story going in very interesting directions.  For these reasons it gets a KING rating from me. 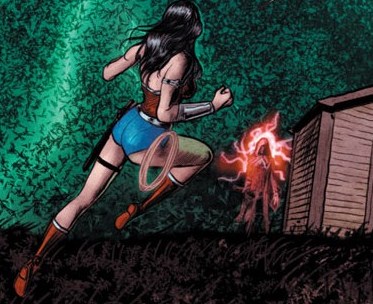