Deep End OF The Pullbox: Build Your Own Boyfriend 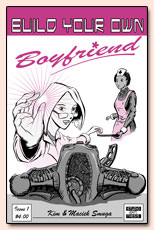 Hard workding Proffessor Gwen Anderson needs someone to conect with. She deals with lazy students who are just tring to creep past with bare minimum effort and she has lost the effort to deal with them. Idea! Build herself a man! One with the same IQ and personality as her (so she can get along with it), use her office to store him (no student ever comes by for help), and ta-da! She had ’01’, later named ‘Owen’ as her new boyfriend.

Sadly, like all relationships you build up in your head, this one isn’t working out the way she planned. Like in the Bride of Frankenstien, comes the age old question, if you are created to be together does that mean you are MENT to be together? Cause the more time Owen spends with Gwen the more she seems jaded by campus life and her slacker students. But after reading a poem by student Debney, it sparks something in the young robot. He was built for Gwen, by maybe ment for someone else entirely.

Created my Kim and Maciek Smuga this is nice flip book comics with great art. Influenced by Japanese art it goes a little heavy on the screentone. Sometimes less is more, cause the art is covered up this way. Great art too. I think it should be shown off more, but aside from that it is a fun read.

Check it out for yourself at www.studioantithesis.com