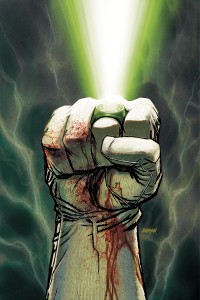 The first issue of Green Lantern was not something I expected to blow me away.  Johns wasn’t going to do some massive overhaul or completely reinvent the character or even strip him down much.  Yes, Hal Jordan is sans his lantern and ring.  Yes, Sinestro is once again a Green Lantern.  And yes, the Guardians are up to something mysterious and sneaky.  But clearly two of these three things are not long for change.

The first glimpse we get of Jordan back on earth is as a guy struggling to pay rent.  Clearly not every super hero can be Bruce Wayne.  But this issue isn’t so much about Jordan as it is about Sinestro.  The parts of the story central to Hal are more about his lacking in any ability to exist as a normal person on earth and that his place is truly out amongst the stars.  He is a hero, even without the ring. 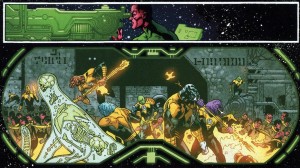 Sinestro returns to his home world to find the people enslaved by members of the Sinestro Corps (a.k.a. yellow lanterns).  Mistaken for a “regular” Green Lantern, Sinestro is attacked by a member of his former corps.  The battle is short and definitive.  The Sinestro Corps member is killed and his ring leaves in search of its next master, but is immediately destroyed by Sinestro.  This part I did not fully understand, but I am curious to see how that plays out. 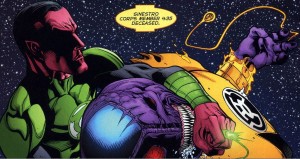 There’s not a whole lot going on in this issue.  It’s clearly just a beginning to the events that are about to be set in motion.  And whereas I am intrigued by what will come in future issues and story arcs, this issue did nothing to really draw me in.  If I was a new reader to the DCU, this issue Green Lantern would do little to specifically peak my interest.

If only for lacking any real shock value or surprise twists of worth this initial issue of Green Lantern gets a QUEEN rating.

I have a lot of faith in Geoff Johns, especially when it’s Green Lantern related, but he’s going to need to step it up in the proceeding issues. 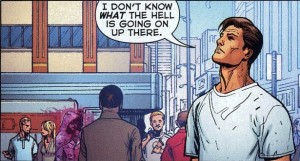