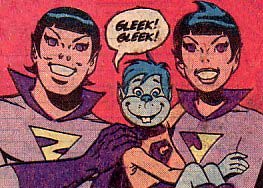 Boy, those Wonder Twins suck though.

If it wasn’t for this monkey making sounds like someone choking on pudding he would place higher, he’s the sidekick to the Wonder Twins after all.

He uses his powers to steal tires apparently

What if a monkey had all the powers of superman? Why doesn’t he have his own books?! 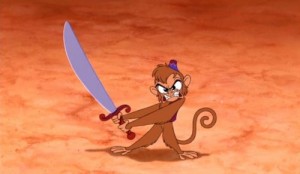 You don't mess with this monkey

A sword wielding thief monkey and partner to the whitest guy in Arabia. Abu also wears a sweet vest. 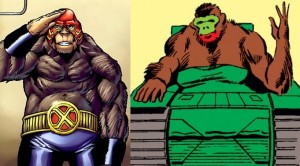 By the way, thats an ape with tits and tank legs....

Whether it’s the luchedore mask wearing from the marvel apes universe or the tank legged assisatant to the Squadron Supreme, Ape X is one bad furry motha. 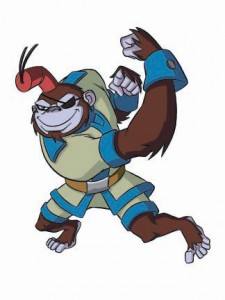 Loves to drink too

Bobo is a gun-toting, cigar chomping chimp with a bad attitude from Generator Rex. He is one of the few good E.V.O’s. He has saved the Earth alongside his best friend Rex many a times, watch the show on CN it’s worth it. 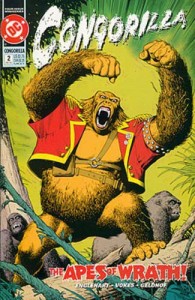 Every comic had a corny title, good stuff.

Imagine if you will an elderly adventurer in his last few years, now imagine he turns himself into a golden gorilla and fights alongside the heroes of Earth! Yeah, crazy cool right! 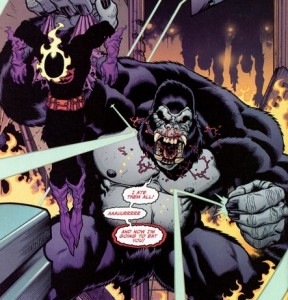 This guy somehow gets beat by the Flash.

Super evil, Super Smart, and super strong, Grodd can  fight with or against the best of them, his psychic powers just add more to this already dangerous dictator. 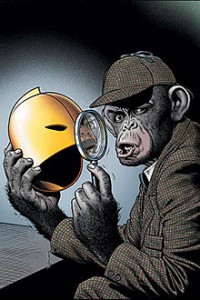 Batman looks to HIM for advice!

Yeah, he’s my number one. Why? He’s smarter than Batman. Detective Chimp is one of the greatest minds ever and he stuck in the body of a chimpanzee. Awesome. This little guy was chosen by the helmet of Fate to be the new Dr.Fate, but decided that his knowledge and it’s wisdom were to dangerous to mix. A truly great hero who doesn’t get nearly enough facetime in the DC Universe.

I'm one of the main contributors to 8 DAG and I take pride in my other job as Public/Staff relations. I'm a comics and movie junkie and I love to podcast. Follow me on Twitter @BrandoCop
View all posts by Brandon C. Williams →
Tagged  apes, comics, funny, lists, Monkeys, top 8.
Bookmark the permalink.