By Donald Lillicrap July 20, 2011 July 20, 2011 Off Topic, rants and raves
Today I wanted to shine a small spotlight on a forgotten toy line. In 1989 ToyBiz had the rights to make toys from the new Batman film. They of course blew it. Which was a shame. In 1990 Kenner took the licence back for DC related toys. Sadly it was not a return to the glory of Kenner’s earlier foray into DC toys. This sort of brings us round about to another odd piece of trivia for the ToyBiz line. They used molds from Kenner’s old Super Powers line to create their own line. 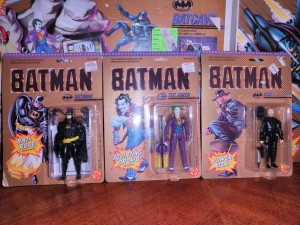 Sorry for the bad picture.

The best part of the ToyBiz line was the vehicles and the Batcave. Kenner never made such a lineup nor did they ever come close to the on screen accuracy ToyBiz had. The only odd ball being the awesome Batcave they made. It is not movie based at all. In fact, you can clearly tell the true inspiration for this toy came from the old television show. How is that for neat! 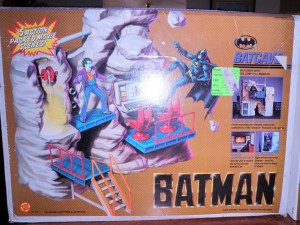 Another odd ball fact is that Bob the Goon has never had a toy since this line. 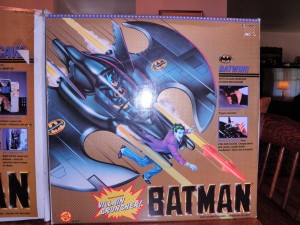 The last odd ball fact is the when Kenner got the toy rights back. They also reused old Super Power molds for the toys. Like I said before, Kenner was green before it was fashionable.

Now my rant for the day. I just heard that DC is going to throw out the relationship between Superman and Lois Lane in the new reboot. What is this Nancy Drew bullshit? Haven’t they heard that Marvel didn’t get many thank you cards in the mail when they undid the Spider-Man and Mary Jane marriage? If you go and copy the damn competition, at least steal the good shit!