The countdown to twenty five continues…getting excited?  Intrigued as to what book I’ll review?  I hope so!  I’ve put a lot of thought into it and I’m thrilled to talk about one of my favorite comics of all time…which just gave it away to the few people I know who read this.

So this week I’m continuing my review of Boom Studios’ title, Hero Squared v.2 which explores the continuing adventures of Milo Stone and Mile Stone, a.k.a. Captain Valor, a.k.a. Eustace (great joke you really just have to read). 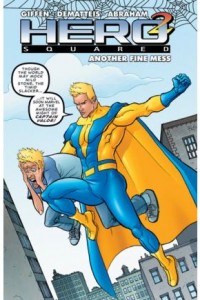 After reading this second installment (of three) I am even more convinced that Giffen & Dematteis as a writing team are incredible.  In the first two issues of this volume they explore in magnificent style the relationships between the two parallel pairs involved in this story.

Caliginous and Stephie “run into” each other at the supermarket; clearly an event conspired to occur by Caliginous.  In a surprisingly calm demeanor Stephie has a conversation with the mass murderer over coffee.  The two have an in-depth discussion wherein Caliginous describes Valor as a universe-destroying closet-homosexual jerk all the while extolling the virtues of Milo.  Stephie is inquisitive as she realizes that she’s looking into an alternate side of herself that clearly exists, buried under the surface, but no less a reality.

Valor and Milo happen upon the two and after the hero confronts his villain with one of his trademark over-the-top speeches Caliginous simply walks away.  But before she does that she tells Stephie one very important piece of information that sets the events of the rest of this and the next volume in motion. 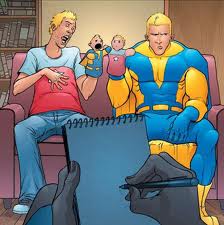 Possibly the piece de resistance of this volume is the battle scene between Captain Valor and a genetically engineered duplicate, created by none other than Caliginous. 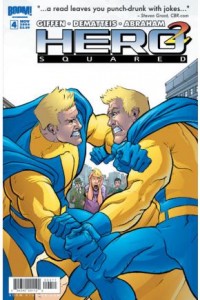 The lack of reality in comics is what most readers are looking for.  Giffen & Dematteis turn that notion on its ear with this battle.  As the two super-powered men fly at each other with reckless abandon neither has any idea that their impact and eventual fall to earth will cause death and destruction in the surrounding area.  It’s rare to appreciate the “reality” of something in a fictional story, but they accomplish it here.

The final part of the book leaves the four characters splintered with seemingly little hope of moving forward with any semblance of purpose.  But thankfully there’s a volume three to put it all right!  Or wrong…depending on your perspective.

As the middle volume of a three part collection Hero Squared: Another Fine Mess had the capacity to really be a letdown.  But we all should have known better than to doubt these two sensational writers.  Thus it gets an unsurprising

I hope you’ve enjoyed this edition of Bin Fodder.  Check back next week for the continued story of Hero Squared.