Hello!  Welcome to this week’s edition of Bin Fodder.  Today I review Wildstorm Comics’ book The Life Eaters.  Eaters was written by David Brin known more as a novelist and public speaker than a comic book writer: this is his only work in the field to date.  Scott Hampton did the paint-style art for the book and is known for his work on Simon Dark and Doc Savage. 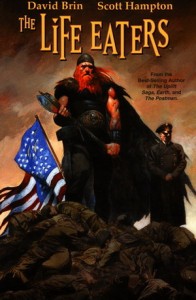 What if the Nazis won World War II?  This is an idea that’s been explored in myriad formats from an episode of Sliders where they visited Nazi World and novels like If The Allies Had Fallen which is a collection of alternate history short stories.  Eaters takes this idea to a whole new level.

Brin imagines that as the war was on the brink of turning, Russia had broken through on the eastern front and was driving the Germans back, but the United States had yet to fully enter the war in Europe when the unthinkable happened. 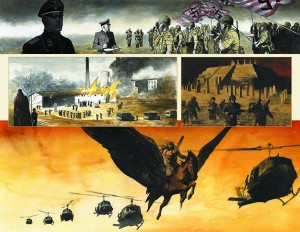 Norse gods, known in this book as Aesir, appear and, much to the chagrin of the rest of the world, side with the Nazis.  The Nazis, backed by the superior Aesir might, win the war and control all of Europe, Africa and much of Asia as the story’s first chapter opens in 1962.

Most prevalent in the story are Thor and Loki with a few appearances by Odin the All Father.  Loki, for reasons never divulged or understood fully, sides with the allies against his Aesir brothers but in his appearances in the story he does as much to help the Nazi cause as hurt it.

When the second chapter opens the story has jumped ahead at least two decades, the United States has finally succumbed to 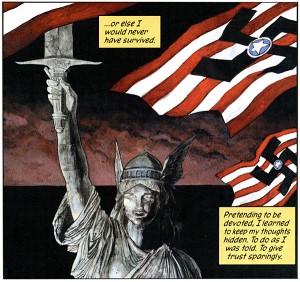 the Aesir lead Nazi machine and freedom is a fairy tale dream held in the minds of few.

By this time many new breed of “Gods” and “Demigods” have appeared in the world from Japanese, Indian, African and Egyptian (true, it’s part of Africa but with its own set of historical figures) lore.

How have these being appeared on Earth?

This mystery is alluded to in several parts of the story and when it finally becomes apparent the truth is as inventive as it is frightening. 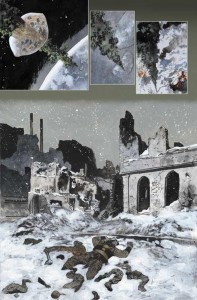 The second and third chapters center on the person who does the monologue during the first chapter: a servant-boy-turned-man-of-the Aesir who has secretly sided with humanity against the monsters.  It is he who stands against Loki when the “god” reappears to collect people to join him in Yggdrasil (the great tree) which climbs to the heavens from Earth drawing all the energy from the planet in an effort to eliminate all those who are unworthy to walk upon it.

In a style of writing that I applaud the story does not wrap up in a nice little bow, the “good guys” don’t win, they survive to continue fighting.  This is a realistic view of the world.  Even when the United States, along with a host of other countries, defeated the Nazis the world wasn’t automatically a better or safer place.

Brin and Hampton are a winning combination for this kind of tale.  Brin with his insightful, albeit sometimes a bit out of sync for comics, style of writing and Hampton’s dark and vivid style art work very well together.  There are some problems with the story, it’s not perfect, but with such a solid concept these minor things are easily overlooked.  I give The Life Eaters 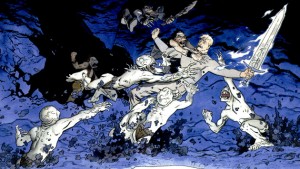