Hello!  Welcome to this week’s edition of Bin Fodder.  Today I continue my review of Barry Ween.  Since I didn’t see any objective comments on my last post I’m going to assume that everyone is on board with the new format for longer-than-mini-series comic book reviews.  Of course now I must prepare myself for the inevitable backlash that is bound to occur. 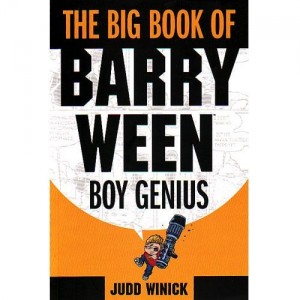 Volumes three and four of Barry Ween: Boy Genius (originally put out all as volume three as individual issues was later collected as two separate trades) explores the depths with which Barry despises things.  Such as: zoos, monkeys, Sasquatch, time travel, parallel universes and, most of all, Jeremy’s love of all of these things.

The first issue of volume three opens with a bit on Jane Goodall, the world renowned primatologist, ending in, “this was a lady in desperate need of a pizza and a real good lay.”  Hilarious, as always. 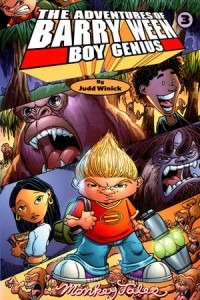 A benefit of volume three of the Barry Ween saga is the expansion of character involvement outside Barry and Jeremy.  First, the audience is introduced to Bezeruul, a giant talking gorilla from a parallel universe.  He connives Barry into helping him attempt to return home.  Sara, a known character from previous issues, plays a much larger role, including being a key component of volume four.  Additionally, Winick introduces a new character into the fold for issues two and three of the third volume, a Sasquatch named Roxie.  Jeremy, with his grand love of women, is instantly enthralled and they even attend a school dance together.  The dance, of course, turns into a semi-disaster with a virus riddled monkey mixing things up and the army trying to kill everyone, but hey…who hasn’t had grade school dances just like that? 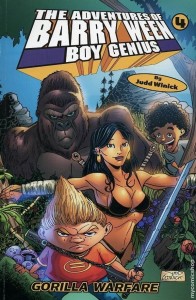 Volume four, as yet the final installment of the series, is certainly the most sincere and heartfelt issues.  Don’t be mistaken, there’s still plenty of vulgarity, violence and enough disdain to block the Holland Tunnel, but Winick pulls it all together masterfully.  As the only continuous storyline of the series, Winick tells a tale of time travel, portals into parallel universes, mind control and jackass warriors.  Bezeruul returns, in a manner of speaking, to bring Barry to his land to once again use his skills.  However, much to both Barry and Bezeruul’s chagrin Sara gets pulled into the portal instead, and that’s where things get really interesting.

I would never want to spoil the ending but one thing I will tell you is that Barry’s true nature, which is apparent in small doses throughout the series, really comes to a head in the end of this fantastic saga. 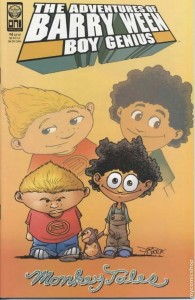 Judd Winick may have started his career with a Frumpy clown and now writes some of the biggest titles in comics, but along the way he told some amazing stories about a boy named Barry.  I think anyone who has read this series would beg for more.  I know I do.

Much the same as the previous volumes I rated, these two have earned