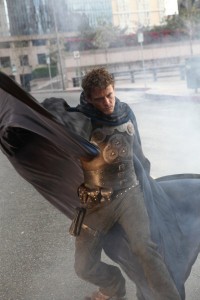 The Cape is the newest in a series of shows hoping to cash in on the superhero craze. I thought the show was interesting and fun, but at times a little too cartoonish for the standard viewer. The show is done with bright colors lots of flashbacks and fun characters. Very comic book like and a true comic book origin makes this a show a true bright light among super hero fans. The Cape a hero trained by carnies.

The cast is pretty solid David Lyons is believable as the good cop who becomes the titular hero, Keith David plays Max Malini The Capes trainer and Ringmaster of the Circus of Crime, Summer Glau is Orwell the brains of the operation, along with other circus freaks, including the strong man Rollo portrayed by little person Martin Klebba make up the good guys. The villains consist of James Frain as Peter Fleming/Chess the mastermind villain who owns the police force and Scales, a monstrous brute played by Vinnie Jones.

The first episode had a little bit of everything a good fun show needs great characters, an interesting story, funny jokes, and even a little heart warming drama. Plus, the fat guy from Borat gets robbed at the end. The dialogue and acting are a bit light, but it really was fun to watch, great action and a good usage of humor and music made it my new favorite show of the season so far.

I'm one of the main contributors to 8 DAG and I take pride in my other job as Public/Staff relations. I'm a comics and movie junkie and I love to podcast. Follow me on Twitter @BrandoCop
View all posts by Brandon C. Williams →
Tagged  review:TV, superheroes, The Cape.
Bookmark the permalink.