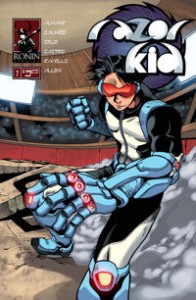 Marcus Alamnd brings us the story of Alex Tanaka, a boy genius who is taking his C.A.P.E  (Citizen Authorized for Protection and Enforcement) trials Alex only his intellect and the two mechanical arms he built, but he is determined to gain a high rank. We soon discovers the reason why he is so determined, a few years ago he worked for Regal Technologies, it was a dream come true for a kid like him, until he saw something he should not have and had both his arms ripped off. This would make any other 12 year old hide under the covers for twenty years but not Alex. Making up his mind to bring down Regal, he builds prosthetic arms and  takes the C.A.P.E. to protect his, and more importantly, his families identity.

Now despite the morbid origin, Razor kid has a positive feel about it. The main character is an egotistical, smart-mouth because of his IQ, but has inspiring inner strength of a real hero that is lacking in most comics nowadays. The art by Jeffery Cruz may seem basic but with creative angles and cinematic fight scenes it lifts it to a higher level. I’ve read and re-read issue 1 many times and cannot wait to read issue 2!

Check it out at www.razorkid.com

I travel the US attending every convention I can! Refairs in Wichita to ComicCons in Chicago. The Anime Fests and one day College Campus Sci-Fi days. I sell nerd-flavored t-shirts and animal hats(think Molly from Runaways) along with random Steampunk. My posts will be about a few of these cons and how YOU as a geek should prepare for them!
View all posts by Katherine Hollingsworth →
Tagged  deep end of the pullbox, Indie comic, razor kid, review.
Bookmark the permalink.