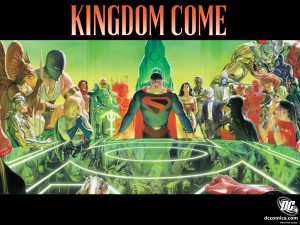 Kingdom Come is the rare comic that comes along makes you actually think. I am the first to admit that I’m not a huge Superman fan, I think he’s very two dimensional and way too overpowered.

Kingdom Come actually does the impossible and makes me care about Superman; this book helped me realize his importance and his affect on the DC universe. A book that is as beautiful as it is epic, Kingdom Come is an absolute must when it comes to anyone wanting to get into comics.

Alex Ross puts small hidden gems in each painting he does for this book making it so you stare at the art well past the time it takes to read the words on the page. What is this book about? A possible future for the DC universe where after the Joker kills Lois Lane and Jimmy Olsen. Superman decides to retire since the Jokers murder at the hands of a new violent hero named Magog. Years pass as the line between hero and villain begin to blur and soon there is a catastrophe that kills thousands when Magog and his team cause a nuclear blast that destroys most of Kansas.

Superman comes out of retirement and with the aid of Wonder Woman, a very Aged Batman, and any other hero who fights the good fight, decides to stop all of the rogue super humans. As the story progresses friendships are tested and powers are combined until one of the greatest endings of all time.  During this story we follow Norman Mckay, an elderly and tired preacher who is our everyman narrating things we could only imagine. The greatest story ever told by DC and in my top 8 of Comic geek must’s.

I'm one of the main contributors to 8 DAG and I take pride in my other job as Public/Staff relations. I'm a comics and movie junkie and I love to podcast. Follow me on Twitter @BrandoCop
View all posts by Brandon C. Williams →
Tagged  batman, comic alert, superman, watchmen.
Bookmark the permalink.