The Anatomy of $60 Video Games 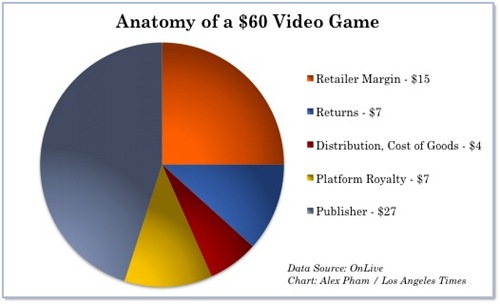 New games are, on average, around $60. I’ve always wondered what makes them that particular price, and this chart gives a rough answer. The post from the LA Times blog is below the cut, copy pasta’d from the source.

Much of the data came via a slide shown Thursday by Steve Perlman, founder of OnLive, an on-demand video game service based in Palo Alto.

Perlman, who spoke during the Design Innovate Communicate Entertain Summit in Las Vegas, showed the slide as part of an update on his company’s service, which is expected to launch later this year.

Another way to look at it is to say publishers such as Activision and Electronic Arts receive $45 after retailers take a $15 cut. Publishers turn around and pay a $7 licensing fee to console manufacturers such as Microsoft, Sony and Nintendo. The cost of making, packaging and shipping game discs to stores carves up another $4. Finally, not all games sell, so the expense of returning unsold inventory eats up another $7.

That leaves publishers with about $27 per disc sold for development, marketing and other expenses. These are, of course, back-of-the-envelope averages. Each of these numbers can vary. For instance, a publisher could negotiate a smaller licensing fee with console manufacturers. And by deploying the Goldilocks method of inventory (not too much, not too little), they can also minimize returns. Tinkering with the margins in these ways lets companies tune their bottom lines.