I Love MegaMan, I can admit that his games are repetitive and that they lack any real story, but hey if Fast and Furious movie can still make money then whats wrong with loving an icon? I have compiled a list of what I view as the coolest and lamest of MegaMans Villains, I didn’t include Megaman x or Megaman battle network villains because let’s face it, I can only choose 5 lame villains.
Coolest MegaMan Villains 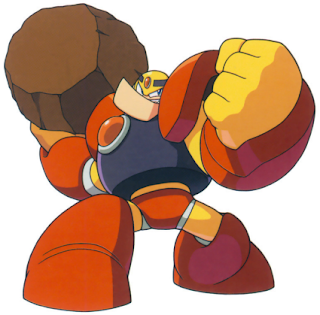 Originally designed to be a construction robot, he’s so tough he doesn’t need a gun arm, instead he’ll throw boulders twice the size of you. Gutsman was the go to brute in the animated series always teaming with his awesome best friend Cutman, sort of like a robot version of Fafhrd and Grey Mouser,(if you know what that is kudos to you) except evil.

Originally designed to investigate narrow areas, he is pure awesome what a great design right. A 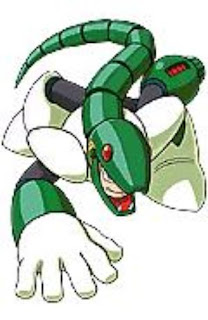 s an added dose of awesome you get one of the coolest weapons ever a snake gun. A SNAKE GUN. If your not sure what that means it’s a gun that fires snakes. I may be a little one sided here but If you have an awesome villain with a great design AND the voice of Cobra Commander, then you roll with it. Please Capcom get this guy a spin off.

defeated,and looks good doing it, so what if his design makes no sense. I think that with a little tweaking he could be the best but his awkward nature sits him up as a little below the best. Any villain who has a level as challenging and nerve-wracking as Pharaohman’s deserves to be on this list. In Pharaohman’s official description his weakness is that he’s to nice to women, so old P-man ( were tight so I call him P-man) is a Ladies man as well. 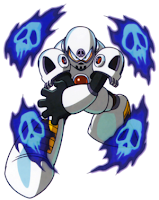 when Brad does, Well imagine that plus it’s a robot who also has and insanely powerful shield and is designed only for fighting and you got Skullman. A fan favorite already, Skullman kicks a lot of ass, he has a sweet look, sweet weapon, and his fighting style is nigh impossible to counter, mostly because it’s your fighting style with better weapons.

So if this list was toughest villains or best levels the results would be different, but the list is

coolest Megaman villains, so the cup goes to Protoman. If I was a villain and I went into every battle taunting the hero wearing pimp sunglasses and a sweet neckerchief then I would be idolized as Worlds Co0lest Bad Guy. Protoman Was not only visually striking , but he also was Megaman’s brother, and yeah I know he later became a good guy but when he was the antagonist he really was the Best Megaman Villain.

I'm one of the main contributors to 8 DAG and I take pride in my other job as Public/Staff relations. I'm a comics and movie junkie and I love to podcast. Follow me on Twitter @BrandoCop
View all posts by Brandon C. Williams →
Tagged  video games.
Bookmark the permalink.